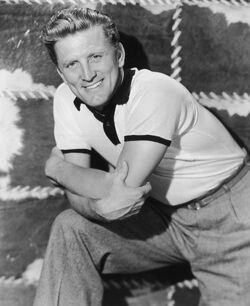 Kirk Douglas (born Issur Danielovitch; December 9, 1916 – February 5, 2020) was an American actor, director and producer. He was best known in films such as The Detective Story, Ace in the Hole, The Bad and the Beautiful, 20,000 Leagues Under the Sea, Spartacus and Lonely Are the Brave.

Douglas was born Issur Danielovitch in Amsterdam, New York, the son of Bryna "Bertha" (née Sanglel) (1884–1978) and Herschel "Harry" Danielovitch (c. 1884–1950, sources on his exact birthyear differ), a businessman. His parents were Jewish immigrants from Chavusy, Mogilev Region, in the Russian Empire (now Belarus), and the family spoke Yiddish at home.