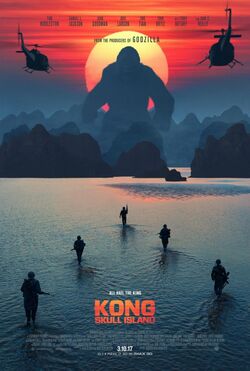 Scientists, soldiers and adventurers unite to explore a mythical, uncharted island in the Pacific Ocean. Cut off from everything they know, they venture into the domain of the mighty Kong, igniting the ultimate battle between man and nature. As their mission of discovery soon becomes one of survival, they must fight to escape from a primal world where humanity does not belong.

Kong: Skull Island received generally positive reviews from critics. On review aggregator Rotten Tomatoes, the film has an approval rating of 75% based on 376 reviews, with an average rating of 6.53/10. The site's critical consensus reads, "Offering exhilarating eye candy, solid acting, and a fast-paced story, Kong: Skull Island earns its spot in the movie monster's mythos without ever matching up to the classic original." On Metacritic, the film has a weighted average score of 62 out of 100, based on 49 critics, indicating "generally favorable reviews". Audiences polled by CinemaScore gave the film an average grade of "B+" on an A+ to F scale.

Add a photo to this gallery
Retrieved from "https://movies.fandom.com/wiki/Kong:_Skull_Island?oldid=308443"
Community content is available under CC-BY-SA unless otherwise noted.