Start a Wiki
watch 01:27
The Loop (Movies)
Do you like this video?
Kris Lemche 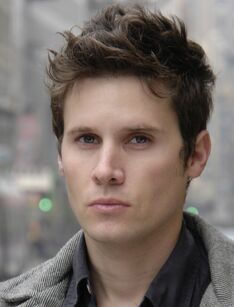 Lemche was born in Brampton, Ontario to a schoolteacher mother and a father who was the proprietor of a heating business. Lemche attended the Mayfield School of Arts. His brother, Matt Lemche, is also an actor.

At 17, he answered a newspaper casting call and won a role on the Disney series Flash Forward.

Abandoning plans to study biochemistry in University, he instead moved to Prince Edward Island to work on the CBC series Emily of New Moon. His work on the show earned him a Gemini Award. He traveled to Dublin to film Newton: A Tale of Two Isaacs, Romania for Teen Knight and Prague for Joan of Arc.

He has appeared on La Femme Nikita and in movies such as eXistenZ, Ginger Snaps and Knockaround Guys. In in the United States, he has appeared on Dragnet, was a series regular on My Guide to Becoming a Rock Star, and had a recurring role on Joan of Arcadia as one of the incarnations of God. He was then seen on the big screen in Final Destination 3 and A Simple Curve. He has appeared on the CBS show Criminal Minds in the episode Blood Hungry, and three episodes of Ghost Whisperer. Most recently, he had a major role in the television movie 24: Redemption. Lemche stars also in the horror film Grinder who is directed by Richard Clark Jr.


Retrieved from "https://movies.fandom.com/wiki/Kris_Lemche?oldid=72599"
Community content is available under CC-BY-SA unless otherwise noted.