watch 00:59
The Loop (Movies)
Do you like this video?
Kubo and the Two Strings 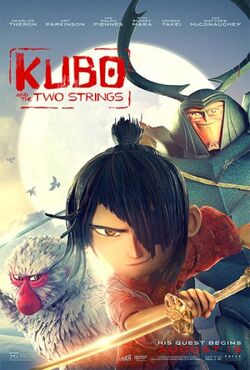 Kubo and the Two Strings is a 2016 American 3D stop-motion animated fantasy action adventure film produced by Laika for Focus Features. It is directed by Travis Knight, written by Marc Haimes and Chris Butler and stars the voices of Charlize Theron, Art Parkinson, Ralph Fiennes, Rooney Mara, George Takei and Matthew McConaughey. The film was released in the United States on August 19, 2016.

Young Kubo's peaceful existence comes crashing down when he accidentally summons a vengeful spirit from the past. Now on the run, Kubo joins forces with Monkey and Beetle to unlock a secret legacy. Armed with a magical instrument, Kubo must battle the Moon King and other gods and monsters to save his family and solve the mystery of his fallen father, the greatest samurai warrior the world has ever known.

Kubo and the Two Strings received positive reviews from film critics. On review aggregator website Rotten Tomatoes the film has an approval rating of 91%, based on 55 reviews, with an average rating of 7.8/10. The site's critical consensus reads, "Kubo and the Two Strings matches its incredible animation with an absorbing -- and bravely melancholy -- story that has something to offer audiences of all ages." On Metacritic, the film has a score of 83 out of 100, based on 19 critics, indicating "universal acclaim".

Retrieved from "https://movies.fandom.com/wiki/Kubo_and_the_Two_Strings?oldid=260233"
Community content is available under CC-BY-SA unless otherwise noted.