for martial arts action and some mild rude humor

In the Spirit Realm, Grandmaster Oogway fights against an adversary named Kai, who has defeated other kung fu masters in the realm and taken their chi, turning them into small jade charms. Oogway willingly gives in and also has his chi stolen, but not before warning Kai that the Dragon Warrior, Po, will stop him. Kai takes this as a challenge to steal the chi from the Dragon Warrior and returns to the mortal realm.

Meanwhile, Master Shifu announces his retirement from teaching to begin his training to master chi and passes the role of teacher to Po. Excited at first, Po discovers that teaching kung fu is not as easy as he expected, as the Furious Five members Tigress, Crane, Mantis, Viper and Monkey are injured as a result. Po is demoralized as a teacher, which makes him question who he really is and whether he is the Dragon Warrior. In response, Shifu advises Po that instead of trying to be a teacher, he should try to be himself.

Po heads home to his adoptive father, Mr. Ping, at his noodle shop, where a panda named Li Shan breaks Po's dumpling-eating record. They both soon learn that Li is Po's biological father and they bond with each other, much to Ping's jealousy. After introducing Li to Shifu and his friends, the valley is attacked by jade statues controlled by Kai and resembling past Kung Fu masters, several of them long dead. The team then learns through research that Kai was Oogway's old friend who fought with him as brothers-in-arms long ago. When Oogway was injured, Kai carried him until they reached a secret village of pandas, who healed Oogway using their chi. The pandas taught Oogway how to give chi, but when the power-hungry Kai decided to drain it from them to increase his power, Oogway defeated him and banished him to the spirit realm. To defeat Kai, Po must learn to master chi himself, which Li offers to teach him by going to a secret panda village. Po, Li and Mr. Ping travel to the village while Shifu and the Furious Five stay behind. Although Po is eager to learn chi, he first learns the relaxed life of a panda in the village, which he feels grateful to be a part of. Some moments later, Po and Li discovers then Mr. Ping was hiding in Po's bag, so he ends join with Po and Li to the secret panda village.

After learning that many Kung Fu masters are missing, Shifu sends Crane and Mantis, who meet with Master Bear, Master Croc and Master Chicken along the way, to find Kai, who steals all their chi. Kai then arrives at the Jade Palace and destroys it, but not before taking the chi of Monkey, Viper and Shifu, while Tigress escapes to warn Po. Afraid, Li and the pandas prepare to run away. When Po demands that Li teach him how to use chi, he confesses that he does not know how, and that he lied so he wouldn't lose his son again. Hurt over his father's misdirection, Po isolates himself and trains vigorously to confront Kai. Mr. Ping admits to Li that he was initially worried Po would be taken away from him, but realized that Li being a part of Po's life simply added to his happiness. Tigress confronts Po and tells him that he cannot defeat Kai without continuing to discover the secret of chi, during which Po confesses that the experience has him once more doubting his potential. Li and the villagers, having decided to stay, ask Po to train them so they can fight back. Realizing what had previously made him fail as a teacher, Po agrees and teaches them using their everyday activities as their assets.

Kai arrives and sends his jade statue minions to capture Po, but they are held off by the pandas and Tigress, distracting Kai. The plan works in holding off the army, but when Po tries to use the Wuxi finger hold on Kai to send him back to the Spirit Realm, he reveals that it can only work on mortals, not a spirit warrior. Kai gains the upper hand in their fight, but Po uses the Wuxi finger hold again on himself while gripping Kai, transporting them both to the beyond. They fight again, with Kai regaining the advantage to subdue, and he begins petrifying Po. Using what they learned from Po and about who they are, Li, Tigress, Mr. Ping and the pandas are able to use their chi to save him. Po then becomes a master of chi after realizing who he really is and uses his chi to create a giant dragon figure which he uses to overload Kai, causing him to explode, killing him and restoring all the fallen masters to normal and transporting them back to the mortal world.

In an ethereal golden pond, Grandmaster Oogway appears to Po, and informs him his journey has come full circle, revealing his role by selecting Po as Dragon Warrior because of his descent from the ancient pandas, and his embodiment of the yin-yang. He also reveals his role in alerting Li to Po's survival, and declares Po his true successor. By choice, Po wields a mystic green yin-yang staff bestowed by Oogway to return to the mortal world. He and his extended family all return to the Valley, where they continue practicing kung fu and their chi under the guidance of Po and the Furious Five. 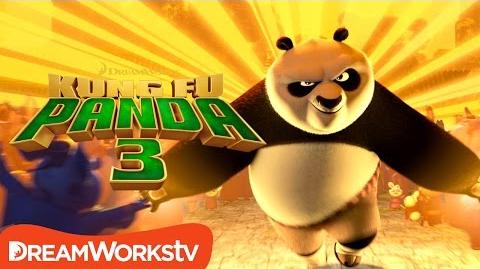