Start a Wiki
watch 01:38
The Loop (Movies)
Do you like this video?
Kurt Russell 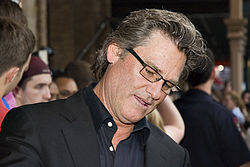 Kurt Russell is an American film actor. He is best known for portraying Elvis Presley in the 1979 film, Elvis. He is still acting in many films, usually in supporting roles.

Russell's first film was It Happened at the World's Fair when he was eleven. Earlier in his childhood he scored a recurring role on the TV show, Sugarfoot. In 1963 he guest starred in the show, Our Man Higgins.

In the 1970s, Russell became more famous. He signed a ten-year contract with Disney. In 1979 he was nominated for an Emmy for his portrayal of Elvis Presley in the movie, Elvis. He later portrayed Elvis in Forrest Gump, as well as an Elvis impersonator in the film 3000 Miles to Graceland.

In 1981, Kurt Russell beat Charles Bronson for the starring role in Escape from new York. In recent years, he has taken on big-budget Hollywood movies. In 2001, he played McCabe in Vanilla Sky. Kurt Russell is still active in Hollywood. In 2012, he will star in the film, Touchback, as Coach Hand.

Retrieved from "https://movies.fandom.com/wiki/Kurt_Russell?oldid=106184"
Community content is available under CC-BY-SA unless otherwise noted.