watch 00:59
The Loop (Movies)
Do you like this video?
Kyle MacLachlan 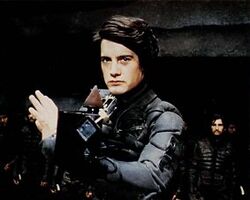 Kyle Merritt MacLachlan (born February 22nd, 1959) is an American actor best known for his work with director David Lynch and in story arcs on two highly-successful Television series centered on female foursomes (Sex and the City and Desperate Housewives).

MacLachlan has worked extensively with Lynch, first appearing as Paul Atreides in Lynch's adaptation of Frank Herbert's Dune and as Jeffrey Beaumont in Blue Velvet. Later he played Special Agent Dale Cooper in Lynch's ABC television series Twin Peaks, reprising that role for Lynch's 1992 prequel Twin Peaks: Fire Walk With Me. Lynch commented on those roles in a 1993 GQ story about MacLachlan:

"Kyle plays innocents who are interested in the mysteries of life. He´s the person you trust enough to go into a strange world with."

In the 1993 film version of Franz Kafka's The Trial, MacLachlan played the lead role of the persecuted Josef K. He also had a recurring role in the American television series Sex and the City, portraying Dr. Trey MacDougal, the temporary husband of Charlotte York (Kristin Davis). He portrayed the spirit of Cary Grant in Touch of Pink. Most noteworthy to critics was his uncanny ability to capture the nuances of Grant's mannerisms. MacLachlan also lent his voice to media mogul Donald Love in the video game Grand Theft Auto III.

MacLachlan has appeared in several plays, including John Kolvenbach's On an Average Day with Woody Harrelson, on Broadway in The Caretaker with Patrick Stewart, as well as in Romeo and Juliet, and the Shakespearean history Henry V.

After starring in the short-lived In Justice, MacLachlan will become a season regular on the hit show Desperate Housewives (His character began in the second-season episode "Don't Look at Me").

MacLachlan was born in Yakima, Washington. He is married, and lives in Manhattan with his wife and their two small dogs (a Jack Russell Terrier and a Yorkie/Chihuahua mix). Blaming it on "probably too much affection," the couple have created a website about their dogs.

Retrieved from "https://movies.fandom.com/wiki/Kyle_MacLachlan?oldid=106224"
Community content is available under CC-BY-SA unless otherwise noted.