watch 01:45
The Loop (Movies)
Do you like this video?
Play Sound
Laura Linney 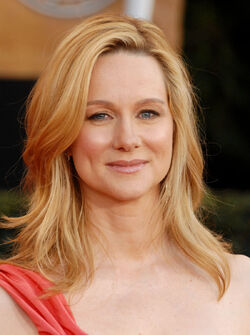 Laura Leggett Linney is an American actress of film, television, and theatre. She is most well known for her performances in films such as The Truman Show, Mystic River and Kinsey, among others. She is currently playing the lead role of Cathy Jamieson in the Showtime series The Big C, which has recently been renewed for a fourth and final season.

Throughout her career she has received three Emmy Awards, two Golden Globe Awards and a Screen Actors Guild Award. Additionally she has been the recipient of three Academy Award nominations and three Tony Award nominations.

She is a 1982 graduate of Northfield Mount Hermon School, an elite preparatory school in New England, for which she currently serves as the chair of the Arts Advisory Council. She then attended Northwestern University before transferring to Brown University, where she studied acting with Jim Barnhill and John Emigh and served on the board of Production Workshop, the university's student theatre group. Linney graduated from Brown with a Bachelor of Fine Arts degree in 1986. She went on to study acting at the Juilliard School as a member of Group 19 (1986–1990), which also included Jeanne Tripplehorn. Linney later received an honorary Doctor of Fine Arts degree from Juilliard when she delivered the school's commencement address in 2009.

Linney appeared in minor roles in a few early 1990s films, including Dave in 1993, before coming to prominence in the public television mini-series Tales of the City. She was then cast in a series of high-profile thrillers, including Congo, Primal Fear and Absolute Power. She made her Hollywood breakthrough in 1998, playing Jim Carrey's on-screen wife in The Truman Show, for which she received critical acclaim.

In 2000, Linney was nominated for an Academy Award for Best Actress for her role in the film You Can Count on Me. The same year, she also appeared in the role of an artist's model in the low-budget film Maze with Rob Morrow. In 2003, Linney appeared in several notable films, including Mystic River, Love Actually and The Life of David Gale. Her 2004 performance in Kinsey, as the title character's wife, was nominated for the Academy Award for Best Supporting Actress.

In 2005, Linney starred in the horror film The Exorcism of Emily Rose and the comedy-drama The Squid and the Whale. For the latter role, she received a Golden Globe nomination for "Best Performance by an Actress in a Motion Picture – Musical or Comedy". In 2006, Linney appeared in the political satire Man of the Year, the comedy Driving Lessons (starring Rupert Grint of Harry Potter fame), and the Australian drama Jindabyne by Ray Lawrence. Jindabyne was based on Raymond Carver's short story So Much Water so Close to Home.

In 2007, Linney appeared in the spy thriller Breach, the comedy-drama The Nanny Diaries opposite Scarlett Johansson and based on the book by Emma McLaughlin and Nicola Kraus, and The Savages with Philip Seymour Hoffman. She received a third Academy Award nomination for The Savages, this time for Best Actress.

In 2008, Linney starred in The Other Man, opposite Liam Neeson, with whom she had starred with in Kinsey and Love Actually, and Antonio Banderas. Later that same year she appeared in the critically acclaimed TV mini-series John Adams portraying Abigail Adams, wife to the second President of the United States, John Adams.

In 2010, she landed one of the leading roles in The Big C, a Showtime dramedy series about a woman living with Cancer.

Retrieved from "https://movies.fandom.com/wiki/Laura_Linney?oldid=177657"
Community content is available under CC-BY-SA unless otherwise noted.