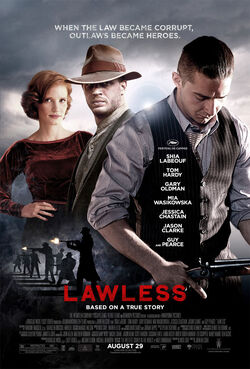 Lawless is a film directed by John Hillcoat. It was released on August 31st, 2012. The star-studded cast includes Shia LaBeouf, Tom Hardy, Gary Oldman, Jessica Chastain, Mia Wasikowska and Guy Pearce. The Nick Cave screenplay is based on the novel The Wettest County in the World by Matt Bondurant. The film has been selected to compete for the Palme d'Or at the 2012 Cannes Film Festival.

Set in the Depression-era Franklin County, Virginia, a bootlegging gang is threatened by authorities who want a cut of their profits.

The story is based on Matt Bondurant's grandfather and great-uncles.

LAWLESS Have You Met Howard?
Add a photo to this gallery

Retrieved from "https://movies.fandom.com/wiki/Lawless?oldid=169301"
Community content is available under CC-BY-SA unless otherwise noted.