Start a Wiki
Lay the Favorite 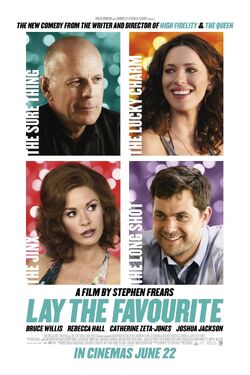 Lay the Favorite is a 2012 American comedy film based on Beth Raymer's memoir of the same title. The film was directed by Stephen Frears.

Set in the wild, extremely funny and lightning-paced world of legal - and illegal - sports gambling, "Lay the Favorite" follows unpredictable dreamer Beth as she goes from in-home stripper in Tallahassee to gambler's assistant in Las Vegas, working for Dink, one of the most successful gamblers in the business.

She takes to the work like a natural, but makes the risky bet to fall for Dink, much to the chagrin of his retired showgirl wife, Tulip.

That bet goes South, and a triangular war ensues.

Against Dink's protests, Beth goes to work for the flamboyant, unstable Rosie who runs a less-than-legal operation in NYC, then for his doomed hyper-speed online sportsbook in the betting Babylon of Curaçao. When Beth's risky gambles results in her innocent boyfriend threatened with prison, she must reunite with Dink, face up to the fearsome Tulip, risk jail, and return to NYC to confront her responsibilities. Can she beat the odds and win the day?

Retrieved from "https://movies.fandom.com/wiki/Lay_the_Favorite?oldid=49407"
Community content is available under CC-BY-SA unless otherwise noted.