Start a Wiki
watch 01:48
The Loop (Movies)
Do you like this video?
Le Roi et l'oiseau 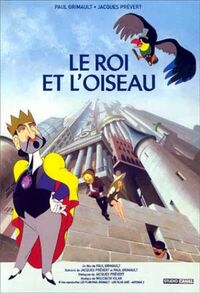 Le Roi et l'oiseau (The King and the Mocking Bird, literally The King and the Bird) is a 1980 traditionally-animated feature film directed by Paul Grimault. Begun in 1948 as The Shepherdess and the Chimney Sweep (loosely based on the fairy tale of the same name by Hans Christian Andersen), it underwent a long production, eventually being finished over 30 years after it was started. The film is today regarded as a masterpiece of French animation and has been cited by the Japanese director Isao Takahata as an influence.

As of 2010, the completed version of the film has not been released with English subtitles on home video, nor is it for sale in the English-speaking world except by import, although the film does not contain a lot of dialogue, and is available in France and Japan. Various low-budget English-language editions have been released of the 1952 version, and it is now in the public domain, with a version with Peter Ustinov voicing the main role of the bird available at the Internet Archive as The Curious Adventures of Mr. Wonderbird.

The huge kingdom of Takicardia is ruled by a king under the unwieldy title of Charles V + III = VIII + VIII = XVI. He’s a heartless ruler, hated by his people as much as he hates them. The king is fond of hunting, but is unfortunately cross-eyed – not that anyone would dare acknowledge this in front of him, as the numerous statues and paintings that adorn the palace and the land show. Occasionally the king does hit his target though, notably the wife of the bird, known only as "l'Oiseau", the narrator of the story who takes pleasure in taunting the terrible king at every opportunity.

In his secret apartment, the king dreams of the beautiful shepherdess whose painting he keeps on his wall, but the shepherdess is in love with the chimney sweep whose hated portrait is on the opposite wall. At night the paintings come to life and attempt to escape from the palace, but are pursued by a non-cross-eyed painting of the king that also has come to life, deposed the real king and has taken his place. He orders the capture of the shepherdess and the sweep, but the bird is there to help when called upon. They are pursued to the depths of the Lower Citywhere the inhabitants have never seen the light of the sun and strange creatures including bat-police take up their chase.

Connection with The Shepherdess and the Chimney SweepEdit

Only the early scene in the secret apartment is based on The Shepherdess and the Chimney Sweep, while the rest of the movie focuses much more on the king and the bird, hence the ultimate title. In Andersen's tale, the shepherdess and the chimney sweep are china figurines, rather than paintings, and a wooden (mahogany) satyr wishes to wed the shepherdess, supported by a Chinaman, rather than a king and a classical statue. In both tales, the Chinaman/statue breaks, and the duo escape up the chimney, and delight in celestial bodies, but in Andersen's tale the shepherdess is afraid of the wide world and the duo return; this is echoed in the movie where the statue predicts that they will return.

Retrieved from "https://movies.fandom.com/wiki/Le_Roi_et_l%27oiseau?oldid=67587"
Community content is available under CC-BY-SA unless otherwise noted.