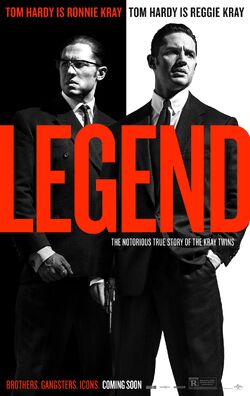 Legend is a British crime thriller film written and directed by Brian Helgeland. This film marks his return to adapted screenplays in the genre of crime since the conclusion of L.A. Confidential. The film is based on the book The Profession of Violence: The Rise and Fall of the Kray Twins by John Pearson, which deals with the rise and fall of the Kray twins; the relationship that bound them together, and charts their gruesome career to their downfall and imprisonment for life in 1969. Tom Hardy and Emily Browning star with Colin Morgan, David Thewlis, Christopher Eccleston, Chazz Palminteri, Tara Fitzgerald, and Taron Egerton featured in supporting roles.

The true story of the rise and fall of London’s most notorious gangsters, Reggie and Ron Kray, both portrayed by Tom Hardy in an amazing double performance. Legend is a classic crime thriller taking us into the secret history of the 1960s and the extraordinary events that secured the infamy of the Kray twins.

Retrieved from "https://movies.fandom.com/wiki/Legend?oldid=112877"
Community content is available under CC-BY-SA unless otherwise noted.