Start a Wiki
watch 01:27
The Loop (Movies)
Do you like this video?
Leonardo DiCaprio 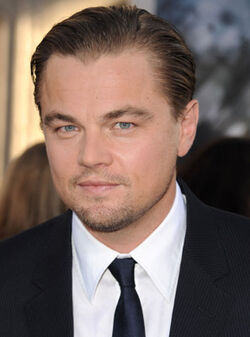 Leonardo Wilhelm DiCaprio is an American actor and film producer from Los Angeles, California. He has received many awards, including a Golden Globe Award for Best Actor for his performance in The Aviator (2004), and has been nominated by the Academy Awards, Screen Actors Guild and the British Academy of Film and Television Arts.

Leonardo DiCaprio was born on November 11, 1974 in Los Angeles, California, USA. His mother named him Leonardo after she saw a Leonardo da Vinci painting and he kicked for the first time. He was kicked off of the children's show Romper Room at age five for being too disruptive. He later became well known for his role on Growing Pains and later in the film What's Eating Gilbert Grape when he played the mentally disabled Arnie.

Retrieved from "https://movies.fandom.com/wiki/Leonardo_DiCaprio?oldid=155587"
Community content is available under CC-BY-SA unless otherwise noted.