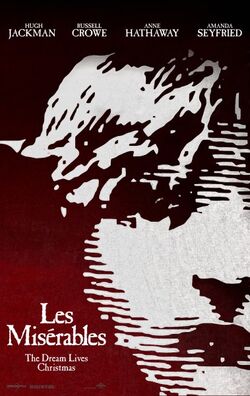 Les Misérables is a 2012 British-American musical film based on the musical of the same name, which is in turn based on an 1862 French novel by Victor Hugo.

Development of the film began in the late 1980s and remained stuck in "development hell" until very recently. After the musical's 25th anniversary concert in 2010, producer Cameron Mackintosh finally announced that the film resumed development. Director Tom Hooper and screenwriter William Nicholson were approached to work on the project in March 2011 and the main characters were cast throughout that same year. Principal photography of the film commenced in March 2012, and took place in various locations in Winchester, London and Portsmouth in England, as well as Paris in France.

The film tells the story of Jean Valjean, a former prisoner who becomes mayor of a town in France. Valjean agrees to take care of Cosette, the illegitimate daughter of Fantine, and must avoid being captured again by Javert, a police inspector. Javert's pursuit of Valjean consumes both men's lives, and after two decades on the run, Valjean finds himself in the midst of the 1832 June Rebellion in Paris.

Principal photography of the film began on March 8, 2012 in France and England. Filming locations include:

Amanda Seyfried as Cosette with Eddie Redmayne as Marius 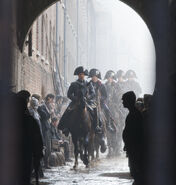 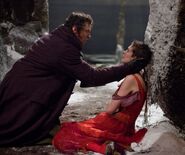 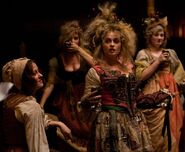