watch 01:20
The Loop (Movies)
Do you like this video?
Liam Neeson 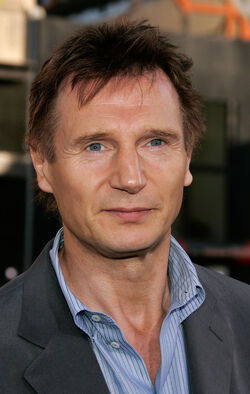 Liam John Neeson OBE (born 7 June 1952) is an Irish actor, who has been nominated for an Oscar, a BAFTA and three Golden Globe Awards. He has starred in a number of notable roles including Oskar Schindler in Schindler's List, Michael Collins in Michael Collins, Peyton Westlake in Darkman, Bryan Mills in Taken, Qui-Gon Jinn in Star Wars Episode I: The Phantom Menace, Alfred Kinsey in Kinsey, Ra's al Ghul in Batman Begins, and the voice of Aslan in The Chronicles of Narnia film series.

He starred in other notable films such as Excalibur, The Dead Pool, Nell, Rob Roy, Les Misérables, The Haunting, Love Actually, Kingdom of Heaven, Clash of the Titans, The A-Team, Unknown, The Grey, and Taken 2 as well as smaller arthouse films (e.g. Deception, Breakfast on Pluto, and Chloe). He was ranked at number 69 on Empire magazine's 100 greatest movie stars of all time in 1997.

He was born in Ballymena, County Antrim and educated at St Patrick's College (now St Patrick's, Dundonald), Ballymena Technical College and Queen's University Belfast. He moved to Dublin after university to further his acting career, joining the Abbey Theatre. After a time in London, he moved to the United States, where the wide acclaim for his performance in Schindler's List led to more high-profile work. He is widowed and lives in New York with his two sons.

Neeson was born on June 7, 1952, in Ballymena, County Antrim, Northern Ireland, and is the son of Katherine "Kitty", a cook, and Bernard "Barney" Neeson, a caretaker at the Ballymena Boys All Saints Primary School. He was raised Roman Catholic at the Ballymena Boys All Saints Primary School. At age nine, Neeson began boxing lessons at the All Saints Youth Club, and later became Ulster amateur senior boxing champion. At age eleven, Neeson first stepped on stage. His English teacher gave him the lead role in a school play, which he accepted because the girl he was attracted to would be starring. From then on, he kept acting in school productions for the following years.

His interest in acting and decision to become an actor was also influenced by minister Ian Paisley, whose church Neeson would sneak into. Neeson has said of Paisley that "He had a magnificent presence and it was incredible to watch this six foot-plus man just Bible-thumping away... It was acting but it was also great acting and stirring too."

Neeson was enrolled in 1971 as a physics and computer science undergraduate student at Queen's University Belfast in Belfast, Northern Ireland, before leaving to work for the Guinness Brewery.

He discovered a talent for football at Queens University. He was spotted by Sean Thomas at Bohemian F.C.. There was a club trial in Dublin. He only played one game as a substitute against Shamrock Rovers and was not offered a contract to continue playing.

After leaving university, Neeson returned to Ballymena where he worked in a variety of casual jobs, from a fork-lift operator at Guinness to a truck driver. He also attended teacher training college in Newcastle for two years before again returning to his home town.

Retrieved from "https://movies.fandom.com/wiki/Liam_Neeson?oldid=270988"
Community content is available under CC-BY-SA unless otherwise noted.