$100,541,806
Life is a 2017 American science fiction horror film directed by Daniel Espinosa, written by Rhett Reese and Paul Wernick and starring Jake Gyllenhaal, Rebecca Ferguson and Ryan Reynolds. The film follows a six-member crew of the International Space Station that uncovers the first evidence of life on Mars, but their discovery may not be what they were hoping for.

The first co-production between Skydance Media and Sony Pictures, the film had its world premiere at South by Southwest on March 18, 2017, and was theatrically released in the United States on March 24, 2017, by Columbia Pictures. It received mixed reviews from critics and grossed $100 million worldwide.

Six astronauts aboard the space station study a sample collected from Mars that could provide evidence for extraterrestrial life on the Red Planet. The crew determines that the sample contains a large, single-celled organism - the first example of life beyond Earth. But..things aren't always what they seem. As the crew begins to conduct research, and their methods end up having unintended consequences, the life form proves more intelligent than anyone ever expected.

The unmanned Pilgrim 7 space probe is returning from Mars to the International Space Station (ISS) with a soil sample that might contain evidence of extraterrestrial life, when it enters an asteroid field and is severely damaged.

The six-member ISS crew captures the spacecraft and exobiologist Hugh Derry revives a dormant cell from the sample, and it quickly grows into a multi-celled organism that American school children name "Calvin". After an atmospheric accident in the lab, Calvin becomes dormant. Hugh revives Calvin with mild electric shocks, but Calvin immediately becomes hostile and attacks Hugh, crushing his hand. While Hugh lies unconscious from Calvin's attack, Calvin uses the electric shock tool Hugh wielded to escape his immediate enclosure. Now free in the lab room, Calvin devours a lab rat by absorbing it and grows in size. Engineer Rory Adams uses the opportunity to enter the room and rescue Hugh. However, Calvin latches onto Rory's leg and physician David Jordan locks Rory in the room to keep Calvin contained. After Rory unsuccessfully attacks Calvin with a flame thrower, Calvin enters his mouth, killing him by devouring his organs from the inside. Emerging from Rory's mouth even larger, Calvin escapes through a fire-control vent. Hugh theorizes that lack of breathable air on Mars is what kept the organism dormant.

Finding their communication with Earth cut off, due to overheating of the communication systems, mission commander Ekaterina Golovkina performs a space walk to fix the overheating. Calvin, having breached the cooling systems, attacks her outside the ISS and ruptures her spacesuit's coolant system in the process, causing toxic liquid to fill her helmet. She struggles to get back into ISS, but eventually realizes that Calvin will also be able to re-enter the space station. She refuses to open the airlock to seek help, and stops David from doing so as well, keeping Calvin out of the station, but also causing her to drown in her spacesuit and her body to drift away into space.

Calvin attempts to enter the station through the thrusters. The crew try to use the thrusters to prevent Calvin from entering these openings, but their attempts fail and the station loses too much fuel. The ISS enters a decaying orbit, which will eventually cause the station to burn up in Earth's atmosphere. Pilot Sho Murakami informs the crew that they need to use the remaining fuel to get back into a safe orbit, but the attempt would allow Calvin back into the station. The crew then plan to make Calvin dormant by sealing themselves into one module and venting the atmosphere from the rest of the station.

When Hugh enters cardiac arrest, the crew realize that Calvin was feeding off Hugh's leg. Having grown into a larger tentacled creature, Calvin attacks the remainder of the crew. Sho seals himself in a sleeping pod as Calvin attempts to crack the glass and consume him. David and the quarantine officer Miranda North use Hugh's corpse as bait to lure Calvin away from Sho and trap it in a module to deprive it of oxygen.

Having received a distress call prior to the damage to the ISS communication system, Earth sends a Soyuz capsule as a fail-safe plan to push the station into deep space. The capsule docks with the station and starts pushing it into deep space. Believing the situation to be a rescue mission, Sho leaves his pod and rushes to board the arriving ship, forcing open the capsule's hatch; once he does that, Calvin attacks him and the Soyuz crew. The encounter causes a docking breach that results in the capsule detaching and crashing into the ISS, killing Sho and the Soyuz pilots. David and Miranda, the only survivors, now realize that the incident has again caused them to enter a decaying orbit. Aware that Calvin could survive re-entry, David recalls two escape pods, planning to lure Calvin into one pod and pilot it into deep space, allowing Miranda to escape to Earth in the other pod.

David leads Calvin into his pod and launches into space as Miranda launches hers. One of the pods hits debris and is knocked off course. Calvin attacks David as he struggles to send his pod into deep space. The pods then separate; the earthbound pod performs a controlled re-entry and lands in the ocean near a boat with two Vietnamese fishermen. As they approach and look inside the pod, it is revealed to be that of David, who is encased in a web-like substance. Meanwhile, due to damage sustained from hitting the debris, Miranda's navigation system malfunctions and fails, and she can only scream helplessly as her pod is sent hurtling into deep space, taking her to a lonely and inevitable death. David, still alive, tries to warn the unwitting fishermen not to attempt a rescue. The fishermen open the pod door as two other fishing boats arrive. 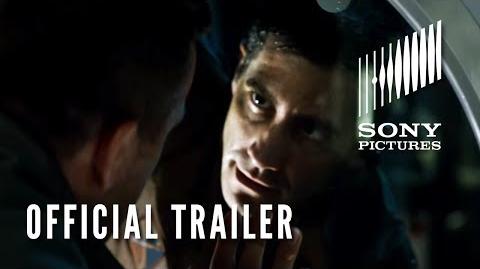 LIFE - Official Trailer (HD)
Add a photo to this gallery

Life (2017) at the Internet Movie Database

Retrieved from "https://movies.fandom.com/wiki/Life_(2017)?oldid=182742"
Community content is available under CC-BY-SA unless otherwise noted.