Start a Wiki
watch 01:27
The Loop (Movies)
Do you like this video?
Life of Pi 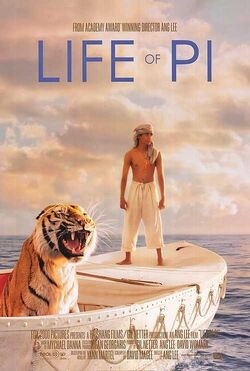 Life of Pi is a 2012 3D fantasy adventure film directed by Ang Lee and written by David Magee, based on the 2001 novel of the same name written by author Yann Martel. The film was released on November 21, 2012.

In a flashback, Pi's father named him Piscine Molitor after a swimming pool in France. By the time he reached secondary school, he changed his name to "Pi" (the Greek letter, π) because he was tired of being called "Pissing Patel" (due to the pronunciation of his name). Pi's family owned a zoo, and Pi took great interest in the animals, especially a Bengal tiger named Richard Parker. When Pi tries feeding Richard Parker through the cage bars, his enraged father runs in and tells him that Richard Parker is dangerous and would kill him if it had the chance, and so his father forces Pi to witness Richard Parker killing a goat to prove his point. Pi is raised Hindu and vegetarian, but at 12 years old, he is introduced to Christianity and then Islam, and decides to follow all three religions as he "just wants to love God". His mother supports his desire to grow, but his father, a rationalist, tries to convert him to his own way of thinking.

When Pi is 16, his father decides to move the family to Canada, where he intends to settle and sell the zoo animals. Pi's family books passage on a Japanese freighter named Tsimtsum. During a storm, the ship founders while Pi is on deck. He tries to find his family, but a member of the crew throws him into a lifeboat. As the ship falls into the sea, a freed zebra jumps onto the boat with him, breaking its leg as it lands. Pi watches helplessly as the ship sinks, drowning his family. After the ship disappears, Pi sees what he believes is a survivor struggling in the ocean. He calls out to the 'survivor' who swims towards the lifeboat, however it turns out to be Richard Parker. Pi attempts to prevent the tiger from entering the boat with an oar, however it climbs in anyway.

After the storm, Pi finds himself in the lifeboat with the injured zebra, and is joined by an orangutan who has survived the sinking on a floating crate of bananas. A spotted hyena emerges from a tarpaulin covering half of the lifeboat and snaps at Pi, forcing him to retreat to the end of the boat, while it kills and eats the zebra, and later fights the orangutan, eventually killing it too. Later, Richard Parker emerges from under the tarpaulin, killing the hyena and attempting to attack Pi, who distracts it by throwing a rat into its mouth. Richard Parker then retreats under the tarpaulin and does not emerge for several days.

After many days at sea, Pi retrieves biscuits, water rations and a hand axe from the lifeboat and builds a small raft to stay at a safe distance from Richard Parker. He begins fishing and is able to feed Richard Parker. He also collects rain water for them to drink. When the tiger jumps into the sea to hunt for fish to eat, Pi considers letting it drown but ultimately helps it climb back into the boat. One night, a humpback whale breaches and lands on the rope connecting the raft to the lifeboat, completely destroying the raft. Pi loses most of his supplies, forcing him to eat fish for the first time in his life. Pi trains Richard Parker to accept him in the boat and realizes that caring for Richard Parker is keeping him alive.

Weeks later they reach a floating island of edible plants, supporting a mangrove jungle, fresh water pools, and a large population of meerkats. Pi and Richard Parker eat and drink freely and regain strength. At night, the island transforms into a hostile environment: Richard Parker retreats to the lifeboat and the meerkats sleep in the trees while the fresh water pools turn acidic and digest the dead fish in the pools. Pi discovers that the island itself is carnivorous after finding a human tooth embedded in a flower. The next day, Pi and Richard Parker leave the island.

Some time later, the lifeboat reaches the coast of Mexico. Pi is crushed emotionally that Richard Parker does not acknowledge him before disappearing into the jungle. Pi is rescued and brought to a hospital. Insurance agents for the Japanese company that owned the freighter interview him, but do not believe his story and ask what "really" happened. Pi tells a different story, in which he shares the lifeboat not with animals, but with his mother, a Buddhist sailor with a broken leg, and the cook. In this story, Pi says that the cook killed the sailor in order to eat him and use him as bait. In a later struggle, Pi's mother pushed her son to safety on a smaller raft before the cook murdered her and threw her body overboard. Pi then took the knife and killed the cook, and managed to survive on the cook's flesh until reaching Mexico. The insurance agents are not satisfied with this story either, but they leave without questioning Pi any further.

Next, Yann notes the parallels between the two stories: the orangutan was Pi's mother, the zebra was the sailor, the hyena was the cook, and Richard Parker was Pi. Pi asks which story the writer prefers, and Yann chooses "the one with the tiger" because it is "the better story", to which Pi responds, "Thank you. And so it goes with God". Glancing at a copy of the insurance report, Yann sees that the agents wrote that Pi survived 227 days at sea with an adult Bengal tiger, meaning they had also chosen to record the first story.

Lee initially struggled with whether or not to employ 3D technology for the film, citing it's cost and a fear of it being gimmicky. But he ultimately decided the advanced technology could bring a painterly, poetic quality to the look. While directing 17-year-old actor Suraj Sharma, the director believed he was giving appropriate instructions until he watched the footage in 3-D. "I'd have to go back to him and bring his performance down because it just enhanced it so much more. It's like a new film language," Lee said, describing his learning curve as "humongous."[1]

He employed Brian Gardner as Stereoscopic Supervisor, stereoscopic technology being hailed as a cinematic storytelling tool to create an emotional undercurrent to the film. At the exhibitor's conference known as Cinemacon, before previewing 10 minutes of footage, Fox Co-Chairman Tom Rothman exclaimed that Lee's accomplishment was on par with the technological breakthrough James Cameron's "Titanic." [2]

Life of Pi was released on November 21, 2012. It was originally scheduled to be released on December 14, 2012, but when The Hobbit: An Unexpected Journey was announced for the same release date, Life of Pi was postponed a week.

Directed by Ang Lee, 'Life of Pi' is an adventurous dramatic movie starring Suraj Sharma, Irrfan Khan, Tabu, Adil Hussain, Rafe Spall, and others in their respective roles. It is based on the 2001 novel of the same name written by Yann Martel. The film had pretty good expectations, because of its impressive promos, promising star-cast, hordes of praises from various film festivals, and much more. However the film had effectively fulfilled the expectations of the moviegoers and deserves the every bit of praises.

'Life Of Pi' is a masterpiece made by the maestro Ang Lee. Right from the gripping story and courageous journey of a teenager boy and a hungry tiger, to brilliant direction, miraculous visual effects and outstanding performances, it deserves to be watched number of times. 'Life Of Pi' is not a film, it's a 'Beautiful Experience'![3] 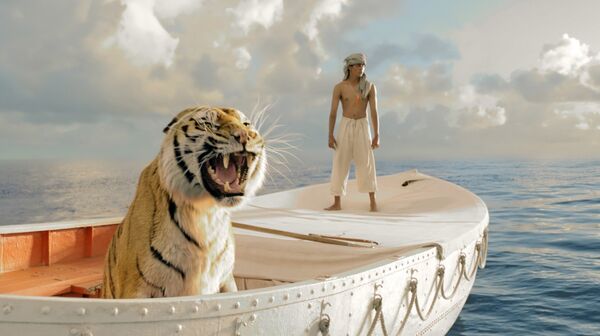 Retrieved from "https://movies.fandom.com/wiki/Life_of_Pi?oldid=168577"
Community content is available under CC-BY-SA unless otherwise noted.