watch 00:59
The Loop (Movies)
Do you like this video?
Lights Out 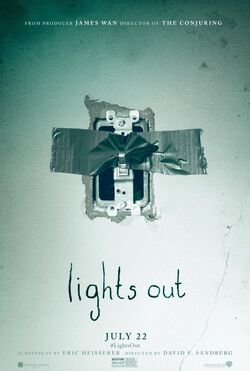 Lights Out is a 2016 American supernatural horror film directed by David F. Sandberg (in his major directorial debut), written by Eric Heisserer and stars Teresa Palmer, Gabriel Bateman, Billy Burke and Maria Bello. It is based on Sandberg's 2013 short film of the same name and features Lotta Losten, who starred in the short. It was released theaterically on July 22, 2016 by Warner Bros.

In a mannequin warehouse, co-worker Esther (Lotta Losten) sees a silhouette of a woman with monstrously long fingers when she turns the lights off, but sees nothing when the lights are on. She warns owner Paul (Billy Burke) about the apparition and leaves. Paul is later dragged into the darkness and gruesomely killed by the woman.

Paul's stepdaughter Rebecca (Teresa Palmer) lives alone in an apartment, away from her mother, Sophie (Maria Bello) and her brother, Martin (Gabriel Bateman). Sophie has mental illness and depression that has resurfaced, in which she talks to an apparently imaginary "friend."

When Martin sees the apparition with his mom, his fear gives him insomnia. Because he has been falling asleep in class, his teacher Emma (Andi Osho) calls Rebecca to the school. Rebecca takes Martin home, but after a fight with their mother, she takes him to her apartment to protect him.

That night, she awakens to scratching by the silhouetted woman, who almost attacks her, though Rebecca manages to turn the light on, making the figure disappear. The next morning, Rebecca finds what the woman was scratching into her floor: the name "Diana." She recalls her own experiences with Diana from her own childhood, and the reason she left when her father abandoned them.

That night, Sophie has a movie night with Martin, but includes her imaginary friend, frightening him. She tells him a story about Diana (Alicia Vela-Bailey), a friend she had when she was in a mental institution for her depression. Diana had an unusual condition that made her skin light-sensitive.

Martin looks up to see Diana crouched above him and runs to turn on the light, but Diana throws Sophie out of the way to get to Martin. She fails and Martin escapes to Rebecca's. Rebecca is seen taking a box of documents from Paul's office that contains information on Sophie and discovers that the doctors experimented on Diana in the institution, killing her by overexposing her to light. The figure is Diana: her vengeful ghost manipulates Sophie to be able to manifest, convincing her that they are friends and killing anyone trying to help her.

Rebecca confronts Sophie about Diana but she denies the accusation. Rebecca, her lover Bret (Alexander DiPersia), and Martin decide to stay overnight to protect Sophie. Rebecca goes to her mom's bedroom door to reconcile when Sophie secretly passes her a note saying "I need help" before Diana tugs her back into the darkness. Rebecca realizes that her mother is being controlled by Diana, and turns on all the lights in the house to keep her away.

Knowing their intentions, Diana baits Rebecca and Martin into the basement by turning off all the lights. Bret is attacked, but he escapes and contacts the police. Rebecca realizes that while Diana disappears under normal light conditions, the use of a black light can allow them to see her. She discovers scrawled writings along a basement wall, explaining how Diana will not let anyone take Sophie. Diana reveals that she killed Rebecca's father and that he didn't abandon them.

A pair of police officers arrive to help and are promptly killed by Diana. Rebecca sends Martin outside to Bret & goes back inside to rescue her mother. Diana is about to kill Rebecca when Sophie arrives brandishing a pistol. Sophie exclaims that she's the only connection Diana has that tethers her to the human world. She sacrifices herself with a bullet to the head in an effort to save her children, causing Diana to burn away and disappear.

Afterwards, the police carry away Sophie's body while Rebecca, Martin and Bret rendezvous at the ambulance. As they embrace and vow to stay together, the lights in the ambulance momentarily flicker, but Bret dismisses it to Rebecca and Martin's satisfaction.

"Lights Out" has grossed a total of $66.4 million in North America and $74.6 million in other territories for a worldwide total of $141 million, against a production budget of $4.9 million.

In North America, the film was projected to gross $13–15 million from 2,900 theaters in its opening weekend. It made $1.8 million from its Thursday night screenings and $9.2 million on its first day.

The film exceeded expectations and earned $21.7 million in its opening weekend, finishing at third place behind fellow newcomer Star Trek Beyond and holdover The Secret Life of Pets.

In other territories, the film earned $8.5 million in its opening weekend from 3,737 screens in key markets of Russia and Australia along with 30 smaller Eastern European and Asian markets. The film benefited from being released in the wake of the global success of The Conjuring 2.

"Lights Out" received generally positive reviews from critics, with specific praise for Palmer's performance. Review aggregator Rotten Tomatoes gives the film an approval rating of 77%, based on 93 reviews, with an average rating of 6.6/10. The site's critical consensus reads, "Lights Out makes skillful use of sturdy genre tropes — and some terrific performances — for an unsettling, fright-filled experience that delivers superior chills without skimping on story." On Metacritic, the film has a score of 57 out of 100, based on 31 critics, indicating "mixed or average reviews".

Retrieved from "https://movies.fandom.com/wiki/Lights_Out_(2016)?oldid=189118"
Community content is available under CC-BY-SA unless otherwise noted.