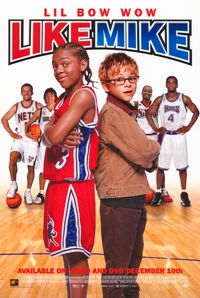 Like Mike is a 2002 film fantasy sports-comedy film, directed by John Schultz and starring Lil' Bow Wow, Morris Chestnut, Jonathan Lipnicki and Brenda Song. It was produced in association with NBA Entertainment and features cameo appearances by many NBA stars.

Calvin and his friends, who all live an in orphanage, find old shoes with the faded letters MJ connected to a powerline. One stormy night, they go to get the shoes when Calvin and the shoes are struck by lightning. Calvin now has unbelievable basketball powers and has the chance to play for the NBA.

Retrieved from "https://movies.fandom.com/wiki/Like_Mike?oldid=119424"
Community content is available under CC-BY-SA unless otherwise noted.