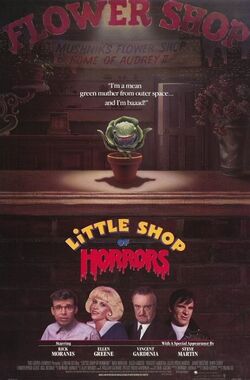 Little Shop of Horrors is a 1986 musical comedy film directed by Frank Oz. It is a film adaptation of the off-Broadway musical comedy of the same name by composer Alan Menken and writer Howard Ashman about a nerdy florist shop worker who raises a vicious, raunchy plant that feeds on human blood. Menken and Ashman's Off-Broadway musical was based on the low-budget 1960 film The Little Shop of Horrors, directed by Roger Corman. The film stars Rick Moranis, Ellen Greene, Vincent Gardenia, Steve Martin, and Levi Stubbs as the voice of Audrey II. This would be the first film Moranis and Martin starred in a movie together, They later star together in three more films Parenthood (1989), My Blue Heaven (1990), and L.A. Story (1991).

Little Shop of Horrors was filmed on the Albert R. Broccoli 007 Stage at the Pinewood Studios in England, where a "downtown" set, complete with overhead train track, was constructed. The film was produced on a budget of $25 million, in contrast to the original 1960 film, which, according to Corman, only cost $30,000. The film's original 23-minute finale, based on the musical's ending, was rewritten and reshot after receiving a strong negative reception from test audiences. Before it was fully restored in 2012 by Warner Home Video, the ending was never available publicly other than in the form of black-and-white workprint footage.

"On the twenty-third day of the month of September,
in an early year of a decade not too long before our own,
the human race suddenly encountered a deadly threat to its very existence.
And this terrifying enemy surfaced, as such enemies often do, in the seemingly most innocent and unlikely of places..."

In September 196X, nerdy Seymour Krelborn and the beautiful but ditzy Audrey work at Mushnik's Flower Shop in the slums of Skid Row in New York City ("Skid Row"). After a day without a single customer, Mushnik prompts to close the store, but Audrey persuades him to let Seymour display a "strange and interesting" plant to attract customers, which Seymour has named "Audrey II". Immediately, a customer enters and asks Seymour about the plant. Seymour explains that he got the plant from an old Chinese man during an unexpected Solar eclipse ("Da-doo"). The plant successfully attracts several customers and puts the flower shop back in business. Seymour's attempts to find proper nourishment for the finicky plant are unsuccessful until he accidentally pricks his finger on a rose thorn, and discovers that Audrey II has an appetite for human blood ("Grow for Me").

Audrey II continues to grow rapidly and Seymour becomes a local celebrity. However, he becomes very weak because Audrey II needs increasingly more of his blood every day. While at work, Seymour attempts to ask Audrey out, but she turns him down because she has a date with her abusive and sadistic dentist boyfriend Orin Scrivello D.D.S. (Dentist!). She does, however, show interest in Seymour and even dreams of marrying him and living in a house together with children ("Somewhere That's Green"). After Seymour closes up shop, Audrey II begins to talk to Seymour, demanding more blood than Seymour can give ("Feed Me"). The plant proposes that he should murder someone for food. In return, he offers Seymour fame and fortune, but Seymour refuses to murder anyone until he witnesses Orin slapping Audrey, and, enraged, agrees to feed him to the plant.

Seymour books an appointment with Orin and arms himself with a revolver, however he cannot bring himself to use it. Orin decides to amuse himself by huffing nitrous oxide, which he is addicted to. He puts on a special gas mask (which provides a constant flow of gas), which malfunctions upon the cap accidentally coming off, preventing him from removing it. He begs Seymour for help while laughing hysterically, but Seymour takes no action. Fading fast, Orin asks Seymor "What'd I ever do to you?", Seymour responds, "Nothing. It's what you did to her." Orin then quotes "Her who? Oh, her." and dies from asphyxiation. That night, Seymour drags Orin's body back to the flower shop where he uses an axe to chop it up for Audrey II (per its demands). Mr. Mushnik witnesses Seymour's actions and flees in fear. Seymour feeds the pieces to Audrey II, who laughs with ravenous glee.

After a sleepless night, Seymour discovers the police questioning Audrey about Orin's disappearance. She says that she feels guilty about Orin's death, even though she did not cause it, because she always secretly wished that he would disappear. Seymour tells Audrey that she should forget her past troubles and should not have such low self-esteem ("Suddenly Seymour"). They admit their feelings for each other and kiss passionately. That night, Mushnik confronts Seymour and accuses him of killing Orin and threatens (at gunpoint) to hand him over to the police ("Suppertime"). Before they walk out the door, Mushnik suddenly decides to bargain with Seymour, offering him a chance to leave Skid Row if he allows Mushnik to take care of (and profit from) the plant. However, Mushnik stumbles into Audrey II's open mouth and gets eaten whole.

Seymour's fortune continues to grow and he becomes a media star, but he is very worried about Audrey II's growth and insatiable appetite ("The Meek Shall Inherit"). After hearing he will receive a large check, Seymour proposes to Audrey, and plans to leave town with her using the money, leaving the plant to starve. Audrey II catches him leaving and demands another meal; Seymour agrees, but insists on ground chuck from the local butcher, to which the stubborn plant defers. While Seymour is gone, the plant calls Audrey, coaxes her into the shop, and then tries to eat her. Seymour returns and saves her just in time. Audrey reveals to Seymour that she doesn't just like him for the plant's success, but that she liked him the day they met (reprise of "Suddenly Seymour"). Suddenly, a salesman Patrick Martin appears and offers Seymour a contract to breed Audrey II and make a fortune by selling the plant to families around the world upon wanting to obtain the leaf cuttings from Audrey II. Shocked, Seymour realizes the plant's intentions, which is world domination.

Seymour goes to confront Audrey II, who then bursts out of its pot and reveals to him that it is an alien from outer space ("Mean Green Mother from Outer Space") as Audrey watches on. During the battle between the two, Audrey II collapse the shop on Seymour and seemingly kills him. However, Seymour grabs an exposed electrical wire and electrocutes Audrey II, causing it to explode. Seymour, having miraculously survived the collapse and the explosion, safely reunites with Audrey. They wed and move to the suburbs, and while they happily run towards their new home, a smiling Audrey II bud can be seen among the flowers in their front yard.

Retrieved from "https://movies.fandom.com/wiki/Little_Shop_of_Horrors_(1986)?oldid=109948"
Community content is available under CC-BY-SA unless otherwise noted.