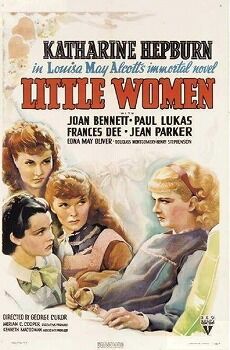 The film was released in the United States on November 16, 1933 by RKO Radio Pictures.

Set in Concord, Massachusetts, during and after the American Civil War, the film is a series of vignettes focusing on the struggles and adventures of the four March sisters and their mother, affectionately known as Marmee (Spring Byington), while they await the return of their father (Samuel S. Hinds), who serves as a colonel and a chaplain in the Union Army. Spirited tomboy Jo (Katharine Hepburn), who caters to the whims of their well-to-do Aunt March (Edna May Oliver), dreams of becoming a famous author, and she writes plays for her sisters to perform for the local children. Amy (Joan Bennett) is pretty but selfish, Meg (Frances Dee) works as a governess, and sensitive Beth (Jean Parker) practices on her clavichord, an aging instrument sorely in need of tuning.

The girls meet Laurie (Douglass Montgomery), who has come to live with his grandfather, Mr. Laurence (Henry Stephenson), the Marches' wealthy next-door neighbor. The Laurences invite them to a lavish party, where Meg meets Laurie's tutor, John Brooke (John Lodge). During the next several months John courts Meg, Jo's first short story becomes published, and Beth often takes advantage of Mr. Laurence's offer for her to practice on his piano.

Marmee learns that her husband is recuperating in a hospital in Washington, D.C., after an injury, so she goes to Washington to care for him. During her absence Beth contracts scarlet fever from a neighbor's baby. She recovers, albeit in a weakened condition. The March parents return, and Meg marries John. Laurie confesses his love to Jo, who rejects him. When he snubs her in return, Jo moves to New York City to pursue her writing career, and she lives in a boarding house. There she meets Professor Bhaer (Paul Lukas), an impoverished German linguist. With his help and encouragement Jo improves her writing, and she resolves her confused feelings about Laurie.

Beth, debilitated, is near to death, so Jo returns to Concord to be with Beth and her family during this time. After Beth dies, a grieving Jo learns that Amy, who accompanied Aunt March to Europe, has fallen in love with Laurie, accepted his proposal and they return, having married. Upon their return, Jo is happy for Laurie and Amy, indicating it has turned out as it always should have been. Professor Bhaer then arrives from New York City, and with him he brings Jo's manuscript for Little Women, which is soon to be published. He confesses his love to Jo and proposes. Jo accepts, welcoming him to the family.