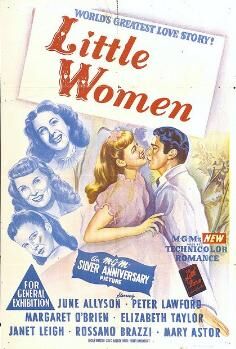 In the small town of Concord, Massachusetts, during the Civil War, the March sisters — Meg (Janet Leigh), Jo (June Allyson), Amy (Elizabeth Taylor), and Beth (Margaret O'Brien) — live with their mother in a state of genteel poverty, their father having lost the family's fortune to an unscrupulous businessman several years earlier. While Mr. March (Leon Ames) serves in the Union Army, Mrs. March (Mary Astor), affectionately referred to as "Marmee" by her daughters, holds the family together and teaches the girls the importance of giving to those less fortunate than themselves, especially during the upcoming Christmas season. Although the spoiled and vain Amy often bemoans the family's lack of material wealth and social status, Jo, an aspiring writer, keeps everyone entertained with her stories and plays, while the youngest March daughter, the shy and sensitive Beth, accompanies Jo's productions on an out-of-tune piano.

The spirited Jo, a tomboy in search of male companionship, strikes up a friendship with Theodore "Laurie" Laurence (Peter Lawford), the grandson of the March's wealthy, but cantankerous neighbor, James Laurence (C. Aubrey Smith). Later that winter, Jo so impresses Mr. Laurence with her forthrightness and her beneficial effect on the brooding Laurie, that he invites the March sisters to a fancy dress ball at his sumptuous home. At the ball, Meg is courted by John Brooke (Richard Stapley), Laurie's tutor, and Jo consents to dance with Laurie while Amy and Beth breathlessly view the scene from their perch atop the staircase. Mr. Laurence's gruff demeanor is softened upon meeting Beth, who reminds him of the beloved granddaughter he lost, and when he learns of her musical talent, he offers her the use of his grand piano. The beautiful evening ends on a sour note, however, when Amy and Beth overhear the snobbish Mrs. Gardiner (Isabel Randolph) and her daughter gossiping about Marmee.

As the weeks pass, Laurie's affection for Jo grows, but Jo rebuffs him as a suitor, claiming that although she loves him as a friend, she will never marry. Meanwhile, Jo attempts to discourage Meg's deepening feelings for Mr. Brooke, fearing that a marriage will break the bond between the sisters. Spring arrives, and Marmee receives word that Mr. March has been wounded and sent to an Army hospital in Washington, D.C. Jo asks her wealthy Aunt March (Lucile Watson) for Marmee's train fare, but the two have a heated argument when the impatient Jo refuses to address Aunt March with the decorum the proud woman demands. As usual, Aunt March comes through for the family, but not before Jo has had her beautiful chestnut locks cut off and sold in order to pay for Marmee's trip. While carrying out Marmee's work for the poor in her absence, Beth contracts scarlet fever, and the distressed and frightened sisters realize how much they depend upon Marmee. Just as Marmee returns, however, Beth's fever breaks, and the entire family is reunited when Laurie arranges for the surprise return of Mr. March.

A few months later, Meg marries Mr. Brooke and Laurie asks Jo to marry him, but she turns him down, explaining that she is uncomfortable in high society and wishes to devote her life to writing. Greatly disappointed, Laurie leaves for Europe, and Jo, saddened by the seeming loss of both Meg and Laurie, who she considers to be her best friend, moves to New York to pursue her career. While boarding at the home of the Kirke family, Jo meets Professor Bhaer (Rossano Brazzi), the Kirke children's German tutor, who introduces her to art museums and the opera. Bhaer later agrees to read Jo's stories, but she is devastated when he later criticizes her work, dismissing it as sensationalistic. Bursting into tears, Jo reveals that she feels abandoned by Laurie and hurt that Aunt March, who had long promised her a trip to Europe, has taken Amy instead. After consoling Jo, with whom he has fallen in love, Professor Bhaer advises her to write from her heart, and Jo decides to return home where she is needed, for Beth is again very ill. Upon her return to the now nearly empty March household, Jo learns that her beloved Beth is dying and spends the next few weeks caring for the courageous girl, who bears her suffering without complaint.

After Beth's death, Jo assuages her grief by writing a novel entitled My Beth, which she sends to Professor Bhaer for his opinion. Later, Meg, now the mother of twins, gently informs Jo that Laurie and Amy have fallen in love in Europe and are to be married. Although Jo is happy for the couple, she realizes for the first time how lonely she is and how much she wishes to be loved. A few weeks later, Laurie and Amy return as husband and wife, and the Marches joyfully celebrate the family's reunion. The festivities are interrupted when Professor Bhaer arrives with Jo's novel, which he has had published. However, when Laurie answers the door, Bhaer mistakenly assumes that Jo has married her friend and politely declines Laurie's invitation to join the party and departs. After Jo catches up to him, the two embrace and he proposes marriage. Jo happily accepts, then leads her future husband back to the warmth of the house, where her family awaits them.