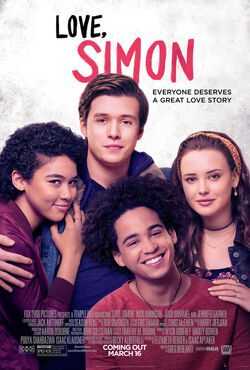 Book
Simon vs. the Homo Sapiens Agenda
by Becky Albertalli

Love, Simon is a 2018 American romantic teen comedy-drama film directed by Greg Berlanti, written by Isaac Aptaker and Elizabeth Berger, and based on the novel Simon vs. the Homo Sapiens Agenda by Becky Albertalli. The film stars Nick Robinson, Josh Duhamel, and Jennifer Garner. It centers on Simon Spier, a closeted gay high school boy who is forced to balance his friends, his family, and the blackmailer threatening to out him to the entire school, while simultaneously attempting to discover the identity of the anonymous classmate with whom he has fallen in love online.

Love, Simon premiered at the Mardi Gras Film Festival on February 27, 2018, and was released in the United States on March 16, 2018, by 20th Century Fox. Critics praised the film for its "big heart, diverse and talented cast, and revolutionary normalcy", describing it as "tender, sweet, and affecting" and a "hugely charming crowd-pleaser" that is "funny, warm-hearted and life-affirming", with reviews comparing it to the romantic comedy-drama films of John Hughes. Notable as the first film by a major Hollywood studio to focus on a gay teenage romance, it has grossed $66.3 million worldwide.

Simon Spier is a closeted gay high school boy living in a suburb of Atlanta, Georgia. He has a close and loving family: parents Emily and Jack, and sister Nora, as well as three best friends: Nick and Leah, whom he has known most of his life, and newcomer Abby.

One day, Leah informs Simon about an online confession of a closeted gay student at their high school, known only by the pseudonym "Blue". Simon begins communicating with Blue via email using the pseudonym "Jacques". The two confide personal details and form a connection. However, their emails are accidentally discovered by another student, Martin, who is infatuated with Abby. After learning his secret, Martin blackmails Simon by threatening to make his emails public unless he agrees to help Martin win over Abby. Simon begins to suspect that his classmate Bram is Blue.

At a Halloween party, Simon attempts to connect with Bram but later walks in on him making out with a female student. Simon lies to Nick, telling him that Abby has a boyfriend in college. Leah walks an inebriated Simon home, where she speaks vaguely about how she feels that she is fated to love one person very intensely; Simon believes she is referring to Nick.

Simon meets up with Abby and Martin at a local diner after he convinces them to practice lines together for an upcoming musical. Simon bonds with their server, a classmate named Lyle, and believes that Lyle may be Blue. That night, Simon comes out to Abby and is relieved when she reacts positively.

At a school football game, Simon crosses paths with Lyle; before he can summon the courage to ask if Lyle is Blue, he finds out Lyle is interested in Abby. An upset Simon tells a pestering Martin to either "go big or go home" when courting Abby. Martin interrupts the national anthem and publicly declares his feelings for Abby. When Abby admits she does not share his feelings, Martin is humiliated and becomes the subject of intense ridicule.

On Christmas Eve, to distract people from his own humiliation, Martin outs Simon by posting his emails on the school gossip site. Simon's sister Nora tries to comfort Simon but he shuts her out and does not return his friends' frantic texts and calls. Simon comes out to his parents on Christmas morning, to their surprise but acceptance.

After the holidays, Nick and Abby, now a couple, angrily confront Simon about the lies he told and learn that he had tried to keep them apart due to Martin's blackmail. Leah confesses to Simon that she was in love with him, not Nick, and is upset he came out to Abby first. After being rejected by his friends, Simon receives a final email from Blue, who is upset that their emails have been leaked. Blue tells Simon that they should stop speaking and deletes his email account. Simon is devastated, having lost his friends as well as the mystery pen-pal he has fallen in love with.

In the cafeteria, Simon and an openly gay student, Ethan, are mocked by two classmates. Ethan and Simon bond over the difficulties they have faced coming out. After his parents reach out and comfort him, Simon apologizes to Leah. Simon posts a confession on the gossip site apologizing to his friends, seeking out Blue and asking him to meet at the school carnival.

After the school musical, Leah, Nick and Abby make amends with Simon and invite him to go to the carnival with them. Waiting for Blue at the carnival, Simon rides the Ferris wheel, drawing a large crowd of peers. When Simon runs out of tickets, Martin, making amends for his behavior, buys him one more ride. Just before the ride begins, Bram sits next to Simon, revealing himself as Blue; the kiss Simon saw with the female student was a drunken misunderstanding. They ride the Ferris wheel together and kiss as their friends cheer them on.

Simon's life gradually returns to normal and he begins a relationship with Bram. While picking up his friends and boyfriend for school, Simon suggests that they forgo their usual morning routine and instead "go on a little adventure".

Principal photography began on March 6, 2017, in Atlanta, Georgia. Filming officially ended on April 23, 2017, two days earlier than scheduled, an effort that Berlanti made to offset the cost of paying royalties for the most expensive songs on the film's soundtrack.

The soundtrack of the film includes music by Bleachers, Troye Sivan, Amy Shark, Brenton Wood, The 1975, Normani and Khalid, among others. The first track released from the soundtrack was "Alfie's Song (Not So Typical Love Song)" by Bleachers.

Love, Simon premiered at the Mardi Gras Film Festival on February 27, 2018, and also screened at the Glasgow Film Festival and the Melbourne Queer Film Festival. The film was released by 20th Century Fox in the United States and Canada on March 16, 2018, and has been or is scheduled to be released in other countries on various dates throughout 2018.

Love, Simon is notable as the first film by a major Hollywood studio to focus on a gay teenage romance.

Love, Simon has grossed $40.8 million in the United States and Canada, and $25.4 million in other territories, for a worldwide total of $66.3 million, against a production budget of $10–17 million. It is the 14th highest-grossing teen romance film since 1980, and the third-highest by 20th Century Fox other than The Fault in Our Stars and Romeo + Juliet.

Love, Simon held early preview screenings on March 10 before its official release on March 16, where it grossed $800,000 from 927 theaters, which Deadline Hollywood considered "strong". In the United States and Canada, the film was released alongside Tomb Raider and I Can Only Imagine, and was projected to gross $10–12 million from 2,401 theaters in its opening weekend. The film made $4.6 million on its first day (including $850,000 from Thursday previews at 2,125 theaters). The film went on to debut at $11.8 million, finishing fifth at the box office; 58% of its opening weekend audience was female and 59% was under 25. In its second weekend the film dropped 33% to $7.8 million, finishing 7th, and in its third weekend made $4.8 million, finishing ninth.

On review aggregation website Rotten Tomatoes, the film has an approval rating of 92% based on 181 reviews, with an average rating of 7.4/10. The website's critical consensus reads, "Love, Simon hits its coming-of-age beats more deftly than many entries in this well-traveled genre – and represents an overdue, if not entirely successful, milestone of inclusion." On Metacritic, the film has a weighted average score of 72 out of 100, based on 38 critics, indicating "generally favorable reviews". Audiences polled by CinemaScore gave the film an average grade of "A+" on an A+ to F scale, one of fewer than 80 films in the history of the service to earn such a score.

Molly Freeman of Screen Rant gave the film 4/5 stars or an Excellent rating, stating that "Love, Simon is a funny, heartfelt, and truly touching teen romantic comedy that instantly becomes a modern classic for today's generation." Josh Winning of GamesRadar+ gave the film 4/5 stars, describing it as a "warm, sensitive and engaging coming-out-of-ager" and "one of the freshest teen-coms in ages".

Meredith Goldstein of The Boston Globe gave the film 3.5/4 stars and stated, "Love, Simon is a sweet, modern romantic comedy that manages to channel the teen movie classics of the late John Hughes, but only the good stuff." Colin Covert of the Star Tribune gave the film 3/4 stars and wrote, "If John Hughes had gone on to make a smart LGBT coming-of-age charmer, most likely it would resemble this."

Bruce Demara of the Toronto Star also gave it 3/4 stars, stating "The casting is high quality, the script – with a tantalizing mystery at its heart – is particularly well-crafted and the story hits all the right emotional notes in delivering a funny, warm-hearted and life-affirming tale." Brian Truitt of USA Today gave the film 3.5/4 stars and wrote, "Young and old, jocks and nerds, geeks and freaks, and everyone in between should be able to find something to adore in Love, Simon."

Joyce Slaton of Common Sense Media gave the film 4/5 stars and described it as "tender, sweet, and affecting", with the film also receiving The Common Sense Seal, which recognizes movies that offer families an exceptional media experience. MJ Franklin of Mashable wrote that "Love, Simon feels like an instant classic that you're going to want to watch again and again."

Max Weiss of Baltimore gave Love, Simon 3/4 stars, calling it a "sweet, funny, warm-hearted film". Kevin Scott of Exclaim! gave the film a 7 out of 10 score, noting that the film has the "expected amount of sentimentality that effectively tugs at the heartstrings".

Peter Debruge of Variety, while stating that the film is average in execution, praised the content as "groundbreaking on so many levels, not least of which is just how otherwise familiar it all seems". Jesse Hassenger of The A.V. Club gave the film a C+ and wrote that the film "is touching as a gesture", but as entertainment "it's nothing Degrassi hasn't done better".

Becky Albertalli, the author of the book, watched an early cut and praised the film, stating: "It's funny and relevant and timeless and charming and honest and painful and so romantic. It says exactly what I wanted the book to say."

While the book has a sequel called Leah on the Offbeat, which features Leah as the protagonist, there are currently no official plans about a sequel to the movie. Although Berlanti indicated that, after seeing the film's success, he would not necessarily be opposed to directing a sequel, stating "God willing that the movie is successful enough that people actually ask for something like that. I loved working with these people on this film so much. I would just like to spend more time with them, that would be good!" When asked about a sequel, Katherine Langford said "I mean, it's always a discussion of who would make it, but if the script was good and the filmmaker had a great vision, then I would be totally down. I'm always down to tell a good story."

Retrieved from "https://movies.fandom.com/wiki/Love,_Simon?oldid=137642"
Community content is available under CC-BY-SA unless otherwise noted.