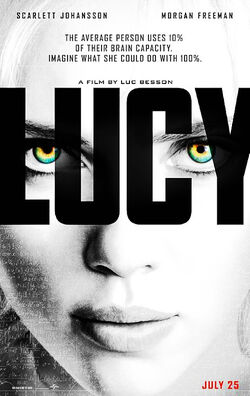 Lucy, a French-American film, is about a woman who is accidentally caught in a dark deal but then turns the tables on her captors and transforms into a merciless warrior evolved beyond human logic. It is set to premiere in the U.S. on July 25, 2014.

In a world run by the mob, street gangs, drug addicts and corrupt cops, Lucy lives in Taipei, Taiwan and is forced to work as a drug mule for the mob. When a drug implanted in her body inadvertently leaks, her entire system is changed, and she gains the ability to use more than the normal 10% of her brain's capacity. She is thus changed into a superhuman. With the change in her body, Lucy can absorb information instantaneously, is able to move objects with her mind, and can choose not to feel pain or other discomforts.