Luke Skywalker - Character from Star Wars. Son of Anakin Skywalker and Padme Amidala and a hero of the Rebel Alliance. 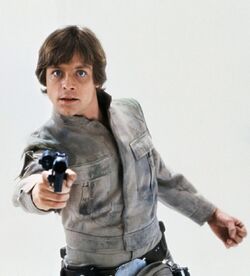 Skywalker's first appearance was in the 1977 film Star Wars, and was portrayed by Mark Hamill in the aforementioned films, excluding 2005's Star Wars: Episode III - Revenge of the Sith. In the eighth entry of the episodic Star Wars films, Star Wars: The Last Jedi, Skywalker projected himself on the planet Crait where a battle is taking place between the Resistance and the First Order, in an attempt to battle Kylo Ren, with Kylo unknowing that Skywalker is not actually present on Crait. The two engage in a brief lightsaber battle when Skywalker's projection disappears. We then see him on the planet Ahch-To, where he physically is. He passes away shortly thereafter.