Lupin III: The Castle of Cagliostro

View src
watch 02:24
Wiki Targeted (Entertainment)
Do you like this video?
Play Sound
The Castle of Cagliostro 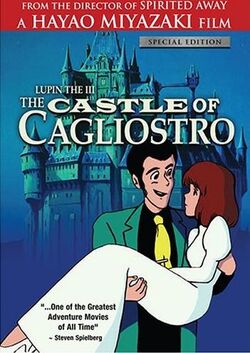 The Castle of Cagliostro (ルパン三世 カリオストロの城, Rupan Sansei: Kariosutoro no Shiro?) is a 1979 film by Japanese animé director and manga artist Hayao Miyazaki. Its main character is Arsené Lupin III, the protagonist of a series of manga and animé created by Monkey Punch and A-Pro.

The second animated Lupin III movie and arguably the most famous, Castle of Cagliostro was written and directed by Hayao Miyazaki (who also co-directed the first Lupin III TV series and directed two episodes of the second) before he formed Studio Ghibli. Cagliostro features gentleman thief Lupin III, grandson to Maurice Leblanc's French literary master thief Arsène Lupin. Some fans of the original manga version of Lupin III dislike this movie as Lupin comes across as too good-natured where the original Lupin III was a cynical, playboy character. However, Monkey Punch mentioned he particularly liked the film, although he did not quite agree with Miyazaki's interpretation.

In the wake of the runaway success of interactive movi] game Dragon's Lair, footage from Castle of Cagliostro was adapted into the laserdisc arcade game Cliff Hanger.

Originally dubbed and released in 1991 by Streamline Pictures, a new dub was recorded by Manga Entertainment in 2000 and changed the tone of many characters. It is debatable which dub was better in quality.

The title alludes to La Comtesse de Cagliostro (The Countess of Cagliostro), the title of an original Arséne Lupin adventure by Maurice Leblanc).

The movie starts out with Lupin and cohort Daisuke Jigen doing what they do best, escaping pursuit after having robbed the national casino of Monaco — only to discover that their entire haul is counterfeit. The bills are of amazingly high quality and could be none other than the legendary "goat money" — perfect counterfeits that have been used to rock the economies of nations since the invention of paper money.

When Lupin was just getting started as a professional thief, he was almost killed while searching for the source of the goat bills. He decides that it is time to take another chance, and the two head off to the (fictional) Duchy of Cagliostro — a tiny country (the smallest country in the United Nations according to Lupin) that appears to be a conglomeration of various old-world European locales.

Shortly after arriving, they rescue a young girl from a car full of thugs, only to let her get captured again when Lupin is knocked unconscious after tumbling down a cliff. They later discover that she is the late grand duke's daughter and is engaged to be married to the evil count.

The count wants to recover the ancient treasure of the Cagliostro family, and needs the princess's ring in order to find it. Wackiness, chases and intrigue ensue.

Lupin's former lover, sometimes enemy/friend Fujiko Mine shows up as an employee in the castle, cohort and master swordsman Goemon Ishikawa is called in to help the gang in their final assault on the castle, and Lupin arch-rival Interpol agent Inspector Zenigata even finds himself allied with Lupin and company in order to expose the count.

In 1979, Tokyo Movie Shinsha released the original theatrical version. In 1991, Metro-Goldwyn-Mayer created a subtitled version for American theatres. MGM/UA Home Video released the film on VHS in 1992 (dubbed by Carl Macek's Streamline Pictures), and Best Film and Video Corp. released it on VHS in 1993 (the Streamline dub). In 2000, Manga Entertainment recorded and released a new dub.

Streamline's dub, while lauded for the overall acting talent of the voice cast, has been widely criticized for its picture cropping and retiming of the opening credits to remove all traces of Japanese hiragana, as well as for liberties taken with the translation of its dialogue. Most famously, Goemon's signature line, "Once again I have cut a worthless object" — uttered as Goemon slashes Lupin's burning clothing off — was altered by Macek into "Should've worn an asbestos suit."

Manga's new dub of Cagliostro has been lauded for its overall faithfulness to the original Japanese dialogue, but criticized for its unnecessary use of four-letter words. In addition, Manga's original DVD release has been criticized for lacking an anamorphic transfer or any extras apart from previews for other Manga Video releases, and in the way its English titles are hard-matted onto the movie's video image, obscuring parts of the screen behind them.

Optimum Releasing re-released Cagliostro in the UK after Manga Entertainment lost its license in the UK. The new DVD features an anamorphic widescreen print with the original Japanese audio track as well as the Streamline dub, both in stereo.

As noted in DVD Aficionado and The Right Stuf, Manga released a new "special edition" DVD of Cagliostro with a street date of August 29, 2006. The disc is double-sided with the movie on side A and the extras on side B. It includes a new digital transfer; Manga's English dub in 2.0 and 5.1 surround plus Japanese, Spanish, and French language tracks in mono; the complete movie in storyboard format, accompanied by Japanese audio with English subtitles; an original Japanese trailer; a sketch and still gallery; a 26-minute interview with animation director Yasuo Ōtsuka; and animated menus. (Early rumors had indicated the disc would also include a Lupin cosplayer photo gallery and an interview with Lupin III creator Monkey Punch; however, these do not appear in the final release.) The movie is presented in 16:9 anamorphic widescreen; however, the opening credits, which feature Lupin and Jigen slowly making their way across Europe to the song "Fire Treasure", have been heavily re-edited to remove the Japanese credits, instead using selected still-frames of scenes that appear without Japanese writing. The English-translated names are superimposed over these stills. The DVD packaging of this special edition is strongly reminiscent of that of Disney's Studio Ghibli film releases.