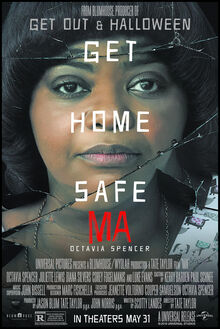 The film was released in the United States on May 31, 2019 by Universal Pictures.

Teenager Maggie Thompson moves with her mother Erica to her Ohio hometown after Erica’s husband leaves her. At high school, Maggie befriends Andy Hawkins, Haley, Chaz, and Darrell. They convince Sue Ann Ellington, a veterinary technician, to help them buy alcohol. Sue Ann anonymously reports the teens' activities, but they're released because of the officer's history with Andy's dad, Ben. The next day, Sue Ann invites the teens to drink in her basement, and many show up at her house to party, making her popular among the students.

However, her hospitality starts to annoy the group as she continuously harasses them to engage in various activities with her. Suspecting that she stole jewelry from them at the parties, Maggie and Haley go to her house to investigate. They are surprised by Genie, Sue Ann's daughter from a failed marriage, who Maggie thought used a wheelchair, but she's clearly able-bodied. She warns them as Sue Ann arrives home, and they narrowly escape.

An increasingly-unstable Sue Ann runs over Mercedes with her truck, killing her. She kills her boss, draws blood from Maggie's dog Louie, and lures Ben to her house, where she knocks him out. Ben wakes up trapped in her bed; Sue Ann pumps Louie's blood into his body, slashes his wrist, and leaves him to die. The next day, the group shows up at her house for Chaz's birthday. Maggie rushes to rescue them, but arrives to find her friends drugged and Ben's body. Sue Ann knocks her unconscious.

Maggie awakens chained in the basement. Sue Ann irons Chaz's stomach, sews Haley's mouth shut, and paints Darrell's face white, a taunt to his race, as he like herself is African-American. Andy awakens, and Sue Ann coaxes him into kissing her before stabbing him. An officer arrives and when Maggie screams for help, Sue Ann shoots the officer dead before he can react. She then gathers the four friends around the couch with her and makes Maggie take photos of them together in a crude recreation of what Sue-Ann always longed for but never had. Sue Ann then leaves Maggie to be hanged before Genie intervenes, saves Maggie, and attacks Sue Ann, inadvertently creating a fire in the process. Erica arrives in time to rescue Maggie and her friends. Sue Ann attempts to throw Genie into the fire, blaming Erica for not stopping Ben from pulling the prank in school. Maggie stabs Sue Ann, saving Genie. As the others escape, Sue Ann walks upstairs and lies down next to Ben's body, cuddling with it as the house burns around her

Retrieved from "https://movies.fandom.com/wiki/Ma?oldid=195281"
Community content is available under CC-BY-SA unless otherwise noted.