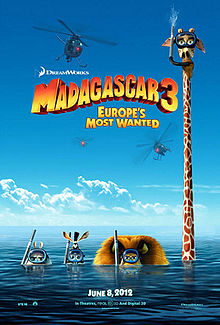 Madagascar 3: Europe's Most Wanted is an upcoming 2012 computer-animated comedy film produced by DreamWorks Animation, and distributed by Paramount Pictures. This film is the third installment of the Madagascar film series. It is set to be released on June 8, 2012, and it will be featuring a new logo of Paramount Pictures as part of its 100th Anniversary.

Retrieved from "https://movies.fandom.com/wiki/Madagascar_3:_Europe%27s_Most_Wanted?oldid=81050"
Community content is available under CC-BY-SA unless otherwise noted.