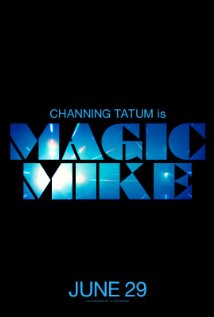 Magic Mike is a comedy film directed by Steven Soderbergh and written by Reid Carolin. The screenplay is based in part on Channing Tatum's experiences as a male stripper when he was 19 years old, before he became an actor. The film was co-financed by Soderbergh and Tatum, and was filmed in Tampa, Florida. It was released on June 29, 2012 in the US.

Veteran stripper Magic Mike (Tatum) teaches a novice (Pettyfer) about the occupation while seeking a lifestyle outside the world of stripping with the help of his protege's sister (Horn). They work at the club Xquisite, which is owned by the former stripper Dallas (McConaughey).