Start a Wiki
watch 01:27
The Loop (Movies)
Do you like this video?
Malcolm McDowell 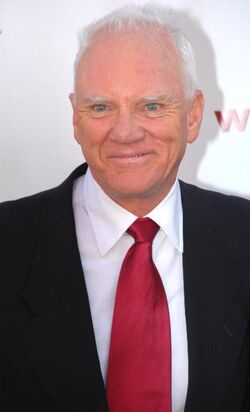 Malcolm McDowell is an English actor, known for his boisterous and sometimes villainous roles, whose career spans more than four decades.

McDowell is known for the controversial films If...., O Lucky Man!, A Clockwork Orange, and Caligula. Since then, his versatility as an actor has led to varied roles in films and television series of different genres, including Tank Girl, Star Trek Generations, the television serial Our Friends in the North, Entourage, Heroes, Metalocalypse, the animated movie Bolt, and the 2007 remake of Halloween. He is also well known for his narration of the seminal 1982 documentary The Complete Beatles.

McDowell was born Malcolm John Taylor in Horsforth, in the West Riding of Yorkshire, now a part of the Metropolitan Borough of the City of Leeds, the son of Edna, a hotelier, and Charles Taylor, a publican. His family later moved to Bridlington, since his father was in the Royal Air Force. McDowell trained as an actor at the London Academy of Music and Dramatic Art (LAMDA).

While enrolled in Cannock House School, he began taking acting classes, and eventually secured work as an extra with the Royal Shakespeare Company. McDowell made his screen debut as school rebel Mick Travis in If.... (1968) by British director Lindsay Anderson. This was followed by Figures in a Landscape (1970) and The Raging Moon (1971). His performance in If.... caught the attention of Stanley Kubrick, who cast McDowell as the lead in A Clockwork Orange, adapted from the novel of the same name by Anthony Burgess. He won great acclaim (nominated for a Golden Globe and an award by the New York Film Critics Circle in the category of Best Actor) as Alex, a young hoodlum brainwashed by a dystopian British government of the near future.

McDowell worked with Anderson again for O Lucky Man! (1973), which was based on his own idea, and Britannia Hospital (1982). McDowell regularly turned up on British television productions in the 1970s in adaptations of theatre classics, one example being with Laurence Olivier in The Collection (1976). He starred in Aces High (1975) and co-starred in Voyage of the Damned (1976), and as Dornford Yates' gentleman hero Richard Chandos in She Fell Among Thieves (1977). He made his Hollywood debut as H. G. Wells in Time After Time (1979). He often portrayed antagonists in the late 1970s and 1980s, including the title character in Caligula (1979).

McDowell appeared in the 1983 action film Blue Thunder as F.E. Cochrane, and the 1982 remake of Cat People. In 1983, he starred in Get Crazy as Reggie Wanker, a parody of Mick Jagger. Also in 1983, McDowell starred as The Wolf (Reginald von Lupen) in Faerie Tale Theatre's rendition of Little Red Riding Hood (his wife at that time, Mary Steenburgen, played Little Red Riding Hood). In 1984, he narrated the documentary The Complete Beatles. He is known in Star Trek circles as "the man who killed Captain Kirk" in the 1994 film Star Trek Generations, in which he played the mad scientist Dr. Tolian Soran.

In 1995, he co-starred with actress and artist Lori Petty in the action/science fiction/comedy film Tank Girl. Here, he played the villain Dr. Kesslee, the evil director of the global Water and Power Company, whose main goal in the story was to control the planet's entire water supply on a future desert-like, post-apocalyptic Earth.

In 2006, McDowell portrayed radio mogul Jonas Slaughter on Law & Order: Criminal Intent. The following year he portrayed the villainous Mr. Linderman on the first season of the NBC series Heroes, a role he reprised in the third season premiere. He portrayed Terrence McQuewick on Entourage and Julian Hodge on Monk.

McDowell appeared as Dr. Sam Loomis in Rob Zombie's remakes of Halloween and Halloween II (in 2007 and 2009, respectively). Although the films were not well received critically, they performed better at the box office and McDowell was widely praised for his performances and for being perfectly cast. He also played Desmond LaRochette in Robert Whitlow's The List, and Irish patriarch Enda Doyle in Red Roses and Petrol (2008).[13] In December 2009, he made an appearance in the music video "Snuff" by the band Slipknot.

McDowell appeared in the 2012 film Vamps and is set to appear in the upcoming Silent Hill: Revelation 3D as Leonard Wolf, an insane cult leader.

In 2011, McDowell was cast in the role of Stanton Infeld on the TNT original series Franklin & Bash.

Retrieved from "https://movies.fandom.com/wiki/Malcolm_McDowell?oldid=192463"
Community content is available under CC-BY-SA unless otherwise noted.