Start a Wiki
watch 01:38
The Loop (Movies)
Do you like this video?
Manchester by the Sea 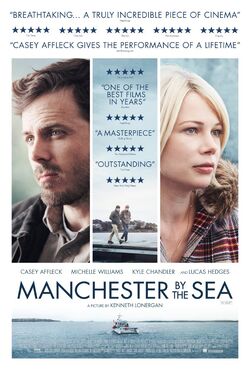 Manchester by the Sea is a 2016 drama film written and directed by Kenneth Longeran and starring Casey Affleck and Michelle Williams . The film follows Lee Chandler (Affleck), a janitor from Quincy, Massachusetts who returns to his hometown of Manchester-by-the-Sea to care for his teenage nephew after the boy's father dies.

Manchester by the Sea received widespread critical acclaim and was regarded as being one of the best films of 2016. At the 74th Golden Globes, Casey Affleck won Best Actor, while the film was nominated for a further four categories.

Lee Chandler is a brooding, irritable loner who works as a handyman for a Boston apartment block. One damp winter day he gets a call summoning him to his hometown, north of the city. His brother's heart has given out suddenly, and he's been named guardian to his 16-year-old nephew. As if losing his only sibling and doubts about raising a teenager weren't enough, his return to the past re-opens an unspeakable tragedy.

Retrieved from "https://movies.fandom.com/wiki/Manchester_by_the_Sea?oldid=119155"
Community content is available under CC-BY-SA unless otherwise noted.