Start a Wiki
watch 01:16
The Loop (Movies)
Do you like this video?
March of the Penguins 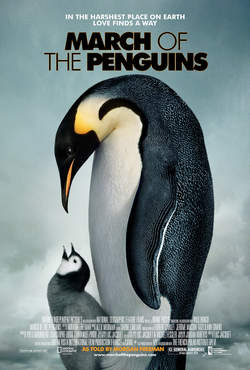 March of the Penguins (French: La Marche de l'Empereur) is a 2006 French nature documentary film. It was directed and co-written by Luc Jacquet, and co-produced by Bonne Pioche and the National Geographic Society. The film depicts the yearly journey of the emperor penguins of Antarctica. In autumn, all the penguins of breeding age (five years old and over) leave the ocean, their normal habitat, to walk inland to their ancestral breeding grounds. There, the penguins participate in a courtship that, if successful, results in the hatching of a chick. For the chick to survive, both parents must make multiple arduous journeys between the ocean and the breeding grounds over the ensuing months.

It took one year for the two isolated cinematographers Laurent Chalet and Jérôme Maison to shoot the film, which was shot around the French scientific base of Dumont d'Urville in Adélie Land.

Retrieved from "https://movies.fandom.com/wiki/March_of_the_Penguins?oldid=111326"
Community content is available under CC-BY-SA unless otherwise noted.