View src
watch 01:36
We're Getting Mutants in the MCU - The Loop
Do you like this video?
Play Sound
Mark Ruffalo 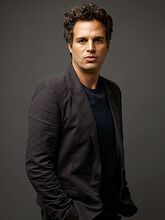 Mark Ruffalo is an American actor, director, producer, and screenwriter. He starred in films such as Eternal Sunshine of the Spotless Mind, Zodiac, Shutter Island, Just Like Heaven, You Can Count on Me and The Kids Are All Right for which he received an Academy Award nomination for Best Supporting Actor.