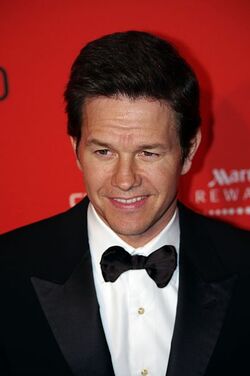 Wahlberg was born in the Dorchester neighborhood of Boston, Massachusetts, the youngest of nine children, with siblings Arthur, Jim, Paul, Robert, Tracey, Michelle, Debbie, and Donnie. His mother, Alma Elaine (née Donnelly), was a bank clerk and nurse's aide, and his father, Donald Edward Wahlberg, was a Teamster who worked as a delivery driver. His parents divorced in 1982. Wahlberg had a Roman Catholic upbringing and attended Copley Square High School (but never graduated) on Newbury Street in Boston.

He spent his teenage years as the member of a criminal gang. He was addicted to cocaine and was involved in multiple assaults. For these crimes, Wahlberg was charged with attempted murder, pleaded guilty to assault, and was sentenced to two years in jail at Boston's Deer Island House of Correction, of which he served 45 days in 1987.

He was involved in the music industry at an early age. He was recruited as a member of pop group New Kids on the Block aged 13 by his brother Donnie. Mark left the group before their success.

He was a successful musician performing with a backing group as Marky Mark and the Funky Bunch. He had a number one single and produced two albums. He toured nationwide with New Kids on the Block. He went on to work as a model. He became a film actor in mid-1990s and went on to star in film projects including The Departed for Martin Scorsese.

He began his television production career with the series Entourage for HBO which was partly based on his own life. He worked with business partner Stephen Levinson on the project. In 2008 Wahlberg and Levinson became executive producers for HBO drama In Treatment, based on the Israeli series Be Tipul.

Wahlberg and Stephen Levinson were executive producers of Boardwalk Empire from its inception. They brought Terence Winter aboard to adapt the book, Boardwalk Empire: The Birth, High Times, and Corruption of Atlantic City. Winter serves as the show runner and head writer for the series. Martin Scorsese joined the project as a director for the pilot episode and an executive producer.

Retrieved from "https://movies.fandom.com/wiki/Mark_Wahlberg?oldid=155737"
Community content is available under CC-BY-SA unless otherwise noted.