watch 00:59
The Loop (Movies)
Do you like this video?
Marlon Brando 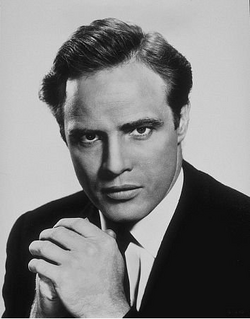 Marlon Brando, Jr. (April 3, 1924 – July 1, 2004) was an Oscar-winning American actor widely regarded as one of the greatest film actors of the 20th century. He brought the techniques of either the Stanislavski System or method acting (commonly mistaken for the same acting technique) to prominence in the films A Streetcar Named Desire and On the Waterfront, both directed by Elia Kazan in the early 1950s. His acting style, combined with his public persona as an outsider uninterested in the Hollywood of the early 1950s, had a profound effect on a generation of actors that would come after him.

Brando was also an activist, lending his presence to many issues, including the American Indian Movement. He was named the fourth "Greatest Male Star of All Time" by the American Film Institute.

Brando was born to Marlon Brando Sr. (1895–1965) and Dorothy Pennebaker Brando (1897-1954) in Omaha, Nebraska. In 1935, when he was 11 years old, his parents separated. His mother briefly took her three children to live with her mother in Santa Ana, California, until 1937 when the parents reconciled and moved to Libertyville, Illinois, northwest of Chicago. Brando was of English, German, Dutch, French, Irish, Scottish and Welsh descent.

The Brando family had been long settled in New York state, being earlier spelled Brandow and originating with a German immigrant Johann Wilhelm Brandau who settled in America in the early 1700s. Brando's mother suffered from alcoholism and was frequently absent in Brando's childhood. She was involved in local theater and helped a young Henry Fonda begin his own acting career, and fueled Brando's interest in stage acting. Brando was a gifted mimic from early childhood and developed a rare ability to absorb the tics and mannerisms of people he played and to display those traits dramatically while staying in character. His elder sister, Jocelyn Brando, was also an actress.

Brando had a tumultuous childhood, in which he was expelled from several schools. He worked as a ditch-digger in his hometown for a brief period, but his father (a man Brando later claimed to despise) grew critical of him and encouraged him to seek his own direction. After discussing plans with his mother to join his sister already in New York and to try to become an actor, Brando would have six months of support from his father, after which he would return home to work for him as a salesman. Brando left Illinois for New York City, where he studied at the American Theatre Wing Professional School, New School Dramatic Workshop, and the Actors' Studio. It was at the New School's Dramatic Workshop that he studied with Stella Adler and learned the revolutionary techniques of the Stanislavski System.

Brando used his Stanislavski System skills for his first summer-stock roles in Sayville, New York. His behavior got him kicked out of the cast of the New School's production in Sayville, but he was discovered in a locally produced play there and then made it to Broadway in the bittersweet drama I Remember Mama in 1944. Critics voted him "Broadway's Most Promising Actor" for his role as an anguished, paraplegic veteran in Truckline Café, although the play was a commercial failure. He achieved real stardom, however, as Stanley Kowalski in Tennessee Williams' play A Streetcar Named Desire in 1947, directed by Elia Kazan. Brando sought out that role, driving to Provincetown, Massachusetts, where Williams was spending the summer, to audition for the part. Williams recalled that he opened the screen door and knew, instantly, that he had his Stanley Kowalski.

According to an article in the Times, Brando auditioned and was accepted immediately for the lead role in Rebel Without a Cause in 1947. He turned the role down and the film was not made until 1955 with James Dean as lead. It is not known why Brando rejected the offer but it is suggested that he did not want to sign the 6-year contract that was necessary at the time.

Brando's first screen role was the bitter crippled veteran in The Men in 1950. True to his method, Brando spent a month in bed at a veterans' hospital to prepare for the role.

He made a much larger impression the following year when he brought his performance as Stanley Kowalski to the screen in Kazan's adaptation of Streetcar in 1951. He was nominated for an Academy Award for Best Actor for that role, and again in each of the next three years for his roles in Viva Zapata! in 1952, Julius Caesar in 1953 as Marc Antony, and On the Waterfront in 1954. These first six films of Brando's career featured performances of monumental proportions and essentially set a new standard not just for all other actors but also for Brando himself.

In 1953, he also starred in Lee Falk's play Arms and the Man. Falk was proud to tell that Marlon Brando turned down an offer of $10,000 per week to act on Broadway, in favor of working on Falk's play in Boston. His Boston contract was less than $500 per week. It would be the last time he ever acted in a stage play.

Brando became a hero for the younger generation by playing motorcycle rebel Johnny Strabler in the movie The Wild One. He created the rebel image for the rock-and-roll era. Many rockers like Elvis Presley imitated Brando's look and character. Elvis took it to another level by bringing the rebel image to the rock-and-roll fans. Elvis also copied Brando's role as Johnny while playing Vince in his 1957 movie Jailhouse Rock. Marlon Brando was a hero for James Dean, who idolized him and copied his acting and persona. For his role as Jim Stark in his 1955 movie Rebel Without a Cause, James Dean studied Marlon's role as Johnny and took it to a new level. (Marlon Brando's name is even mentioned in the movie.) Director Nick Ray even took the gang image from the movie The Wild One and brought it to this movie and thus emphasized Brando's effect on the youth. All the rebel culture that included motorcycle, leather jackets, jeans and the whole rebel image, that inspired generations of rebels, came thanks to the movie and Brando's own unique image and character.

Brando finally won the Oscar for his role of Terry Malloy in On The Waterfront. Under Kazan's direction, and with a talented ensemble around him, Brando used his Stanislavski System training and improvisational skills. Brando claimed that he had improvised much of his dialogue with Rod Steiger in the famous, much-quoted scene with him in the back of a taxicab ("I could have been a contender"). Kazan disputed this.

Brando followed that triumph by a variety of roles in the 1950s that defied expectations: as Sky Masterson in Guys and Dolls, where he managed to carry off a singing role; as Sakini, a Japanese interpreter for the U.S. Army in postwar Japan in The Teahouse of the August Moon; as an Air Force officer in Sayonara; and a Nazi officer in The Young Lions. While he won an Oscar nomination for his acting in Sayonara, his acting had lost much of its energy and direction by the end of the 1950s.

Brando's star sank even further in the 1960s as he turned in increasingly uninspired performances in Mutiny on the Bounty and several other forgettable films. Even at this professional low point, though, Brando still managed to produce a few exceptional films, such as One-Eyed Jacks (1961), a western that would be the only film Brando would ever direct; Reflections in a Golden Eye (1967), portraying a repressed gay army officer; and Burn! (1969), which Brando would later claim as his personal favorite, although it was a commercial failure. Nonetheless, his career had gone into almost complete eclipse by the end of the decade thanks to his reputation as a difficult star and his record in overbudget or marginal movies.

His performance as Vito Corleone in The Godfather in 1972 changed this. Director Francis Ford Coppola convinced Brando to submit to a "make-up" test, in which Brando did his own makeup. Coppola was electrified by Brando's characterization as the head of a crime family, but had to fight the studio in order to cast him. Brando won the Academy Award for Best Actor for his performance; once again, he improvised important details that lent more humanity to what could otherwise have been a clichéd role.

Brando turned down the Academy Award, the second actor to refuse an Oscar (the first being George C. Scott for Patton). Brando boycotted the award ceremony, sending little-known actress Sacheen Littlefeather to state his reasons, which were based on his objections to the depiction of Native Americans by Hollywood and television. There was later much controversy when it emerged that Littlefeather was not a Native American Indian at all, but a Mexican actress named Maria Cruz.

His career afterward was uneven: in addition to his iconic performance as Colonel Kurtz in Apocalypse Now.

Brando also played Jor-El, Superman's father, in the first Superman movie — a role he agreed to only on condition that he did not have to read the script beforehand and his lines would be displayed somewhere offscreen. He also filmed scenes for the movie's sequel, Superman II, but the producers refused to pay him the enormous percentage he was paid for the first movie, so he denied them permission to use the footage. However, the footage was re-incorporated into the 2006 re-cut of the film, Superman II: The Richard Donner Cut.

Two years after his death in 2004, he "reprised" the role of Jor-El in the 2006 "loose sequel" Superman Returns, in which both used and unused archive footage of Brando as Jor-El from the first two Superman films was remastered for a scene in the Fortress of Solitude, as well as Brando's voice-overs being used throughout the film.

Other later performances, such as The Island of Dr Moreau, earned him some of his most uncomplimentary reviews of his career. Despite announcing his retirement from acting in 1980, he subsequently gave interesting supporting performances in movies such as A Dry White Season (for which he was again nominated for an Oscar in 1989), The Freshman in 1990 and Don Juan DeMarco in 1995 (during which time he met and befriended Johnny Depp). In his last film, The Score (2001), he starred with fellow method actor Robert De Niro.

Brando dated many women and was married three times. He was the father of eleven children, three of them were adopted. In 1976, Brando has said to have many "homosexual experiences", but he was not ashamed. In his own autobiography Songs My Mother Taught Me, he wrote he met Marilyn Monroe at a party where she played piano.

Brando performed in Ben Hecht's Zionist play A Flag is Born in 1946. Brando was affiliated with the Democratic Party. He voted for John F. Kennedy in the 1960 United States presidential election. In August 1963, he participated in the March on Washington for Jobs and Freedom, along with celebrities Charlton Heston, Burt Lancaster, Sidney Poitier, Harry Belafonte and James Garner.

Brando was also a freedom rider along with Paul Newman. After the assassination of Martin Luther King, Jr. on April 4, 1968, he made very strong commitments to furthering King's work.

Wikiquote has a collection of quotations from or about:
Marlon Brando

Retrieved from "https://movies.fandom.com/wiki/Marlon_Brando?oldid=155574"
Community content is available under CC-BY-SA unless otherwise noted.