Start a Wiki
watch 01:27
The Loop (Movies)
Do you like this video?
Mars Attacks! 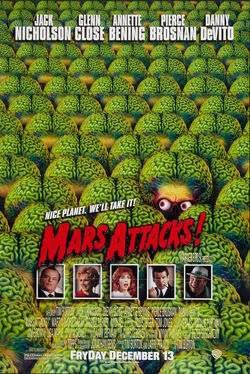 Burton and Gems began development for Mars Attacks! in 1993, and Warner Bros. purchased the film rights to the trading card series on Burton's behalf. When Gems turned in his first draft in 1994, Warner Bros. commissioned rewrites from Gems, Burton, Martin Amis, Scott Alexander and Larry Karaszewski in an attempt to lower the budget to $60 million. The final production budget came to $80 million, while Warner Bros. spent another $20 million on the Mars Attacks! marketing campaign. Filming took place from February to November 1996. It was famous for the quirky alien laugh, which was created by reversing the sound ducks make when they quack.

The filmmakers hired Industrial Light & Magic to create the Martians using computer animation after their previous plan to use stop motion, supervised by Barry Purves, fell through because of budget limitations. Mars Attacks! was released on December 13, 1996 to mixed reviews from critics. The film grossed approximately $101 million in box office totals, which was seen as a disappointment. Mars Attacks! was nominated for the Hugo Award for Best Dramatic Presentation and earned multiple nominations at the Saturn Awards.

When Martians surround Earth with an armada of flying saucers, President James "Jimmy" Dale addresses America concerning the historic event. People around the country follow the story, including news anchors in New York, employees and guests at the Luxor Las Vegas hotel in Nevada and a trailer trash family in fictional Perkinsville, Kansas. The President's science aides set up a first contact meeting with the Martians in Pahrump, Nevada.

Using a universal translator, the Martians announce they have "come in peace." However, when a hippie releases a dove as a symbol of peace, the Martians shoot it down and attack the army and gathered crowd. General Casey, Jason Stone, and Billy-Glenn are among those killed. Thinking that the reason for this is a "cultural misunderstanding," President Dale has Professor Donald Kessler continue negotiations with the Martians, whose ambassador is invited to address the United States Congress. At this meeting, the Martians massacre most of the members of Congress and retreat to their saucer. Kessler begs for the Martian ambassador to stop, but he is knocked out and taken aboard their ship.

General Decker tries to convince President Dale to retaliate with nuclear warfare, but the president refuses. A Martian assassin, disguised as a beautiful woman, enters the White House and unsuccessfully attempts to assassinate Dale. After the unsuccessful attempt on his life, the Martians then begin a full-scale invasion, in which they destroy Big Ben, the Eiffel Tower, the Taj Mahal, the Washington Monument, the Easter Island Moais, Mount Rushmore – replacing the stone president heads with Martian heads, and other locations.

Meeting with the ambassador one more time to plead for peace, the ambassador goes to shake hands with President Dale but the ambassador's hand comes off and crawls on President Dale, and then stabs him to death. Meanwhile, Richie Norris, a Kansas teenager, discovers that the Martians heads explode when they hear Slim Whitman's "Indian Love Call". He and his grandmother drive around town, using the song to destroy the Martians. The military hears about the recording and broadcasts it around the globe and into space, killing most of the Martians and causing the few remaining survivors to flee Earth.

Richie and his grandmother are later awarded the Medal of Honor by the only surviving member of the government, the President's teenage daughter, Taffy, at a ceremony including a Mariachi band playing The Star Spangled Banner on the steps of the ruined United States Capitol.