watch 00:59
The Loop (Movies)
Do you like this video?
Mary Queen of Scots 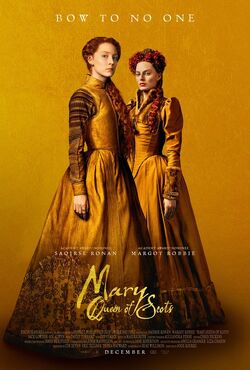 Mary Queen of Scots is a 2018 historical drama film directed by Josie Rourke and written by Beau Willimon, based on John Guy's biography Queen of Scots: The True Life of Mary Stuart. The film stars Saoirse Ronan as the eponymous character and Margot Robbie as her cousin, Queen Elizabeth I, and chronicles the 1569 conflict between their two countries. Jack Lowden, Joe Alwyn, David Tennant, and Guy Pearce also star.

Mary Queen of Scots had its world premiere on closing night of AFI Fest on 15 November 2018, and is scheduled to be released in the United States on 7 December 2018, and in the United Kingdom on 18 January 2019. The film received generally positive reviews, with praise for the performances and costumes but criticism towards the script and several historical inaccuracies.

Mary Queen of Scots explores the turbulent life of the charismatic Mary Stuart. Queen of France at 16 and widowed at 18, Mary defies pressure to remarry. Instead, she returns to her native Scotland to reclaim her rightful throne. But Scotland and England fall under the rule of the compelling Elizabeth I. Each young Queen beholds her "sister" in fear and fascination. Rivals in power and in love, and female regents in a masculine world, the two must decide how to play the game of marriage versus independence. Determined to rule as much more than a figurehead, Mary asserts her claim to the English throne, threatening Elizabeth's sovereignty. Betrayal, rebellion, and conspiracies within each court imperil both thrones - and change the course of history.

The film was originally planned to be a Scarlett Johansson vehicle, scheduled to begin shooting in the summer of 2007 on a $25–30 million budget. After Johansson dropped out, the film languished in development hell for several years before on 9 August 2012, it was announced that Saoirse Ronan would play the title role of Mary Stuart. On 21 April 2017, Margot Robbie was cast to play Queen Elizabeth I, and that the film was scheduled to commence principal photography in August 2017. The film based on John Guy's biography My Heart Is My Own: The Life of Mary Queen of Scots would be produced by Working Title's Tim Bevan, Eric Fellner, and Debra Hayward. Josie Rourke was announced to direct the film from an adapted screenplay by Beau Willimon. On 13 June 2017, Jack Lowden was announced to play Lord Darnley, while Joe Alwyn was announced to play Robert Dudley. On 22 June 2017, it was reported that Martin Compston was cast in the film to play James Hepburn, 4th Earl of Bothwell, the third husband of Stuart. On 23 June 2017, German-Romanian actress Maria-Victoria Dragus had also joined the cast to play Scottish noblewoman and childhood friend of Stuart, Mary Fleming, marking her English-language debut. On 17 August 2017, Brendan Coyle, David Tennant, and Guy Pearce joined the cast. On 18 August 2017, Gemma Chan joined the cast. On 22 August 2017, Ismael Cruz Córdova was cast to play David Rizzio, Mary's close friend and confidant.

Principal photography began on 17 August 2017, in various locations around the United Kingdom, including Scotland.

It had its world premiere at the closing night gala of AFI Fest on 15 November 2018 in Los Angeles, CA. The film is scheduled to be released in the United States on 7 December 2018, and in the United Kingdom on 18 January 2019.

On review aggregator website Rotten Tomatoes, the film holds an approval rating of 82% based on 34 reviews, with an average rating of 7.2/10. The website's critical consensus reads, "Mary Queen of Scots delivers smartly crafted period political thrills while offering a brilliant showcase for the talents of its well-matched leads." On Metacritic, the film has a weighted average score of 71 out of 100, based on 13 critics, indicating "generally favorable reviews".

Mary Queen of Scots on IMDb

Retrieved from "https://movies.fandom.com/wiki/Mary_Queen_of_Scots?oldid=162745"
Community content is available under CC-BY-SA unless otherwise noted.