Master and Commander: The Far Side of the World

View src
watch 02:24
Wiki Targeted (Entertainment)
Do you like this video?
Play Sound
Master and Commander: The Far Side of the World 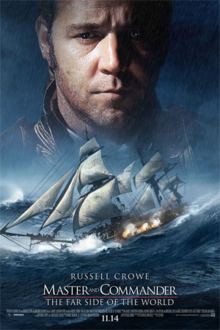 Master and Commander: The Far Side of the World is a 2003 American epic historical drama film directed by Peter Weir, starring Russell Crowe as Jack Aubrey, with Paul Bettany as Stephen Maturin and released by 20th Century Fox and Universal Studios. The film's plot and characters are adapted from three novels in author Patrick O'Brian's Aubrey–Maturin series, which has a total of 20 novels of Jack Aubrey's naval career.

At the 76th Academy Awards, the film was nominated for 10 Oscars, including Best Picture. It won in two categories, Best Cinematography and Best Sound Editing and lost in all other categories to The Lord of the Rings: The Return of the King.