View src
watch 01:33
House of the Dragon Trailer - The Loop
Do you like this video?
Play Sound
Matt Damon 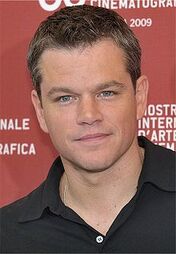 Matthew Paige "Matt" Damon is an American actor. He was born on October 8, 1970 and was raised in Cambridge, Massachusetts by his parents Kent Telfer Damon and Nancy Carlsson-Paige.

Matt Damon got his start when he acted in the rom-com Mystic Pizza. He continued to act while at Harvard University. He became most famous after filming Good Will Hunting, a movie he wrote with Ben Affleck. The film received nine Academy Award nominations. Steven Spielberg later cast him in the film Saving Private Ryan.

Currently his film We Bought A Zoo is out in theaters.

He also starred in many other popular films, such as the Bourne series, the film Dogma in 1999, The Departed, Syriana and The Good Shepherd. He is also known for his humanitarian work and liberal political views.

Matt Damon has been married to former bartender Luciana Barroso since 2005. He is stepfather to her daughter from a previous marriage, and they have three daughters together.