Start a Wiki
watch 01:48
The Loop (Movies)
Do you like this video?
Maya the Bee Movie 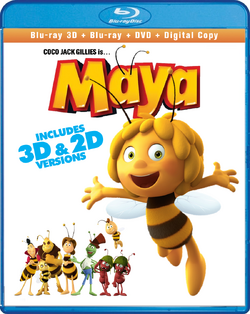 Maya the Bee (released in North America with a shortened form, Maya) is a 2014 German-Australian 3D animated comedy-adventure film directed by Alexs Stadermann, based on the German children's book of the same name by Waldemar Bonsels. It features the voices of Kodi Smit-McPhee, Noah Taylor, Richard Roxburgh, Jacki Weaver, and Miriam Margolyes. It was released in Australia on November 1, 2014 and will be released in the U.K. on March 14, 2015. The film is also released in the U.S. as a direct-to-video release on Blu-ray 3D, Blu-ray and DVD on May 19, 2015 by Shout! Factory. This film was originally rated G by MPAA. But later, Shout! Factory Kids re-rated the film PG for mild rude humor and thematic elements, according to the Blu-ray website.

Maya is bored and takes to the meadows with her best friend, Willy to find the journey and to escape the monotony of controlling hive life. Flip the grasshopper helps Maya avoids enemies like the hornets, moths, dung beetles and spiders, while rescuing the Queen from her evil Court Adviser, Buzzlina Von Beena.

Animation World Network announced in May 2013 that Universum Film would distribute all German rights of the film.

In November 2014, Variety announced that distributor Shout! Factory picked up all North American rights to the film. The film is directed by Alexs Stadermann, and produced by Patrick Elmendorff and Thorsten Wegener from Studio 100 Animation; Jim Ballantine and Barbara Stephen from Buzz Studios. The film was produced in association with Flying Bark Productions and ZDF.

This film was Coco Jack Gillies film debut as she voiced the role of Maya. Gillies was 9 years old at the time of production.

Maya the Bee was originally going to get a G rating, but the film had the scene where Maya farts and smell the stench in order to keep the film within "PG" rating by MPAA.

Frank Hatherley from Screen Daily stated that "this merry movie is for young children, mainly girls: step aside, Dora the Explorer!" with vivid colours and plenty of unthreatening action, while Rotten Tomatoes has a 61% Audience Score.

Retrieved from "https://movies.fandom.com/wiki/Maya_the_Bee?oldid=176616"
Community content is available under CC-BY-SA unless otherwise noted.