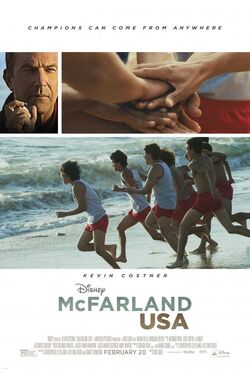 McFarland, USA (also known as McFarland) is a 2015 American sports drama film directed by Niki Caro. The cast of the film consists of Kevin Costner, Maria Bello, and Morgan Saylor.

The film was released in the United States on February 20, 2015 by Walt Disney Studios Motion Pictures.

In 1987 football coach, Jim White, loses his job after he loses his temper and accidentally injures a team player in the locker room. He and his family relocate for his new job at McFarland High School in McFarland, California, which is predominantly Latino. The rest of his family has trouble adjusting to the Hispanic neighborhood and lament being unable to move to Bakersfield.

White is first put as assistant football coach, but ultimately loses his football coaching status when he pulls a player out, fearing he would be badly injured on the field.

Discovering that some of his students are strong runners, he has the school's principal authorize cross-country as a sport and organises an all-boys team. Its seven members have little hope for their future, specifically Tomas Vallez, due to hardships with his father. White's devotion to the team leads to his own hardships with his family, including forgetting to pick up his daughter Julie's Birthday cake.

After a few regional competitions, the team wins its first race. Shortly after, the Diaz brothers are taken off the team by their father, who wants them to work for his team of field pickers instead. In response, White convinces them to come to meets and races at earlier and later times of the day, to which they finally address him as "coach". White's wife Cheryl organizes a tamale and car wash sale with the rest of the neighborhood to raise money for new uniforms, where the family and the neighborhood become better acquainted.

Eventually, the McFarland team competes in and wins their first State race, and White takes them to the beach to celebrate. White also makes amends with Julie by throwing her a quinceañera with help from the neighbors, though it goes wrong when Julie is taken out on "parade" and the group is attacked by street punks.

Jim is offered a full-time position at Palo Alto, upsetting Tomas. Cheryl implores him to continue to be there for the McFarland team and their friends in the neighborhood. The day of the state championships comes, and thanks to White's rigorous training and encouragement, McFarland come in first, while White also turns down the Palo Alto position in favor of McFarland.

Under White's guidance, the team becomes outstandingly successful, winning nine state titles over the years. All the members of the first team become the first in their families to go to college or into military careers. Almost all members continue to attend the practices that Jim White held for successive school cross country teams even after graduation from college. White continues teaching and coaching in McFarland.