Start a Wiki
watch 01:38
The Loop (Movies)
Do you like this video?
Me Before You 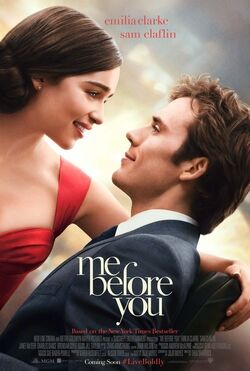 Me Before You is a 2016 American-British romantic comedy-drama film directed by Thea Sharrock and adapted by Jojo Moyes from her 2012 novel of the same name. The film stars Emilia Clarke, Sam Claflin, Jenna Coleman, Charles Dance, Matthew Lewis, Ben Lloyd-Hughes and Janet McTeer. The film was released on June 3, 2016.

Young and quirky Louisa "Lou" Clark (Emilia Clarke) moves from one job to the next to help her family make ends meet. Her cheerful attitude is put to the test when she becomes a caregiver for Will Traynor (Sam Claflin), a wealthy young banker left paralyzed from an accident two years earlier. Will's cynical outlook starts to change when Louisa shows him that life is worth living. As their bond deepens, their lives and hearts change in ways neither one could have imagined.

Me Before You has received mixed reviews from critics. On Rotten Tomatoes the film has a rating of 57%, based on 114 reviews, with an average rating is 5.7/10. The site's critical consensus reads, "Me Before You benefits from Emilia Clarke and Sam Claflin's alluring chemistry, although it isn't enough to compensate for its clumsy treatment of a sensitive subject." On Metacritic the film has a score of 51 out of 100, based on 36 critics, indicating "mixed or average reviews". Audiences however gave a much more positive reception. On CinemaScore, audiences gave the film an average grade of "A" on an A+ to F scale.

Retrieved from "https://movies.fandom.com/wiki/Me_Before_You?oldid=164633"
Community content is available under CC-BY-SA unless otherwise noted.