Start a Wiki
Meet the Blacks 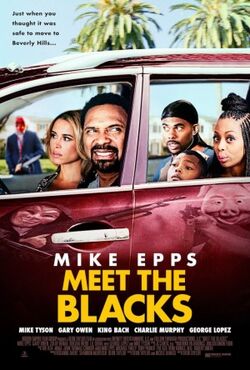 Meet the Blacks is a 2016 American comedy film directed by Deon Taylor and written by Deon Taylor and Nicole DeMasi. The film is a parody of the 2013 film The Purge. It stars Mike Epps, Gary Owen, Zulay Henao, Lil Duval, Bresha Webb, George Lopez and Mike Tyson. The film was released on April 1, 2016.

After obtaining a great deal of money, the patriarch (Mike Epps) of a black family decides they should move from Chicago to a posh neighborhood in Beverly Hills. However, they are soon terrorized by home intruders who want them out of the affluent community in this comedic spoof of the Purge films.

Meet the Blacks received negative reviews from critics. On Rotten Tomatoes, the film has an approval rating of 13%, based on 8 reviews, with an average rating of 2.2/10. On Metacritic, the film has a score of 26 out of 100, based on 4 critics, indicating "generally unfavorable reviews".

Retrieved from "https://movies.fandom.com/wiki/Meet_the_Blacks?oldid=99165"
Community content is available under CC-BY-SA unless otherwise noted.