Start a Wiki
watch 01:27
The Loop (Movies)
Do you like this video?
Megan Fox 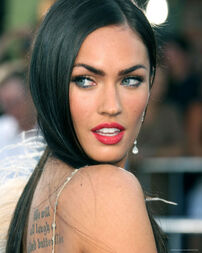 Megan Fox, born 16 May 1986, is an American actress. She is best known for her screen siren performance in Michael Bay's Transformers. Prior to starring in the Transformers films, she was the second actress to play Sydney Shanowski in the sitcom Hope & Faith. A self-described comic book geek, she collects books such as Witchblade, Fathom and Gen¹³.

Other film roles include Jennifer's Body and Sacha Baron Cohen's The Dictator.

Retrieved from "https://movies.fandom.com/wiki/Megan_Fox?oldid=130134"
Community content is available under CC-BY-SA unless otherwise noted.