watch 00:59
The Loop (Movies)
Do you like this video?
Mel Gibson 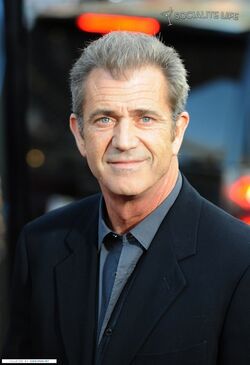 Mel Gibson is an American born but Australian-raised actor, film director, producer and screenwriter. Gibson moved with his parents to Sydney when he was 12 years old and later studied acting at the Australian National Institute of Dramatic Art.

After appearing in the Mad Max and Lethal Weapon series, Gibson went on to direct and star in the Academy Award-winning Braveheart. In 2004, he directed and produced The Passion of the Christ, a film portraying the last hours in the life of Jesus.

Gibson got his breakthrough role as the leather-clad post-apocalyptic survivor in George Miller's Mad Max. The independently financed blockbuster helped to make him an international star everywhere but in the United States, where the actors' Australian accents were dubbed with American accents.[43] The original film spawned two sequels: Mad Max 2 (known in North America as The Road Warrior), and Mad Max 3 (known in North America as Mad Max Beyond Thunderdome). A fourth movie, Mad Max 4: Fury Road, is in development, but both Gibson and George Miller have indicated that the starring role would go to a younger actor.

Gibson played the role of the cynical Frank Dunne alongside co-star Mark Lee in the 1981 Peter Weir film. Gallipoli is about a group of young men from rural Western Australia who enlist in the Australian Imperial Force during World War I. They are sent to the Ottoman Empire, where they take part in the Gallipoli Campaign. During the course of the movie, the young men slowly lose their innocence about the war. The climax of the movie occurs at the brutal attack during Battle of the Nek. According to Gibson, "Gallipoli was the birth of a nation. It was the shattering of a dream for Australia. They had banded together to fight the Hun and died by the thousands in a dirty little trench war."[45][verification needed] The critically acclaimed film helped to further launch Gibson's career.[46] He won the award for Best Actor in a Leading Role from the Australian Film Institute.

Gibson played a naïve but ambitious journalist opposite Sigourney Weaver and Linda Hunt in Peter Weir’s atmospheric 1982 film The Year of Living Dangerously, based on the novel of the same name by Christopher Koch. The movie was both a critical and commercial success, and the upcoming Australian actor was heavily marketed by MGM studio. In his review of the film, Vincent Canby of The New York Times wrote, "If this film doesn't make an international star of Mr. Gibson, then nothing will. He possesses both the necessary talent and the screen presence." According to John Hiscock of The Daily Telegraph, the film did, indeed, establish Gibson as an international talent.

Gibson was initially reluctant to accept the role of Guy Hamilton. "I didn't necessarily see my role as a great challenge. My character was, like the film suggests, a puppet. And I went with that. It wasn't some star thing, even though they advertised it that way." Gibson saw some similarities between himself and the character of Guy. "He's not a silver-tongued devil. He's kind of immature and he has some rough edges and I guess you could say the same for me."[13] Gibson has cited this screen performance as his personal favorite.

Gibson followed the footsteps of Errol Flynn, Clark Gable, and Marlon Brando by starring as Fletcher Christian in a cinematic retelling of the mutiny on the Bounty. The resulting 1984 film The Bounty is considered to be the most historically accurate version. However, Gibson thinks that the film's revisionism did not go far enough. He stated that his character should have been portrayed as more of a villain and described Anthony Hopkins's performance as William Bligh as the best aspect of the film.

Gibson moved into more mainstream commercial filmmaking with the popular buddy cop Lethal Weapon series, which began with the 1987 original. In the films he played LAPD Detective Martin Riggs, a recently widowed Vietnam veteran with a death wish and a penchant for violence and gunplay. In the films, he is partnered with a reserved family man named Roger Murtaugh (Danny Glover). Following the success of Lethal Weapon, director Richard Donner and principal cast revisited the characters in three sequels, Lethal Weapon 2 (1989), Lethal Weapon 3 (1993), and Lethal Weapon 4 (1998). With its fourth installment, the Lethal Weapon series embodied "the quintessence of the buddy cop pic".

Gibson made the unusual transition from the action to classical genres, playing the melancholic Danish prince in Franco Zeffirelli's Hamlet. Gibson was cast alongside such experienced Shakespearean actors as Ian Holm, Alan Bates, and Paul Scofield. He described working with his fellow cast members as similar to being "thrown into the ring with Mike Tyson".

Mel Gibson directed, produced, and starred in Braveheart, an epic telling of the legend of Sir William Wallace, a 13th century Scottish patriot. Gibson received two Academy Awards, Best Director and Best Picture, for his second directorial effort. In winning the Academy Award for Best Director, Gibson became only the sixth actor-turned-filmmaker to do so. Braveheart influenced the Scottish nationalist movement and helped to revive the film genre of the historical epic; the Battle of Stirling Bridge sequence is considered by critics to be one of the all-time-best-directed battle scenes.

The Passion of the Christ[edit | edit source]

Gibson directed, produced, co-wrote, and funded the 2004 film The Passion of the Christ, which chronicled the passion and death of Jesus (Jim Caviezel). The film was shot exclusively in Aramaic, Latin, and Hebrew. Although Gibson originally intended to release the film without subtitles; he eventually relented for theatrical exhibition. The film sparked divergent reviews, ranging from high praise to criticism of the violence.

The Anti-Defamation League further accused Gibson of anti-semitism over the film's unflattering depiction of Caiaphas and the Sanhedrin. Among those to defend Gibson were Orthodox Jewish Rabbi Daniel Lapin and radio personality Michael Medved. Referring to ADL National Director Abraham Foxman, Rabbi Lapin said that by calling The Passion of the Christ anti-Semitic, "what he is saying is that the only way (for Christians) to escape the wrath of Foxman is to repudiate (their own) faith."

In an interview with the Globe and Mail, Gibson stated, "If anyone has distorted Gospel passages to rationalize cruelty towards Jews or anyone, it's in defiance of repeated Papal condemnation. The Papacy has condemned racism in any form... Jesus died for the sins of all times, and I'll be the first on the line for culpability".

Eventually, the continued media attacks began to anger Gibson. After his father's Holocaust denial was sharply criticized in print by The New York Times writer Frank Rich, Gibson retorted, "I want to kill him. I want his intestines on a stick.... I want to kill his dog."

Gibson's Traditionalist Catholic upbringing was also the target of criticism. In a 2006 interview with Diane Sawyer, Gibson stated that he feels that his "human rights were violated" by the often vitriolic attacks on his person, his father's beliefs, and his religious beliefs which were sparked by The Passion.

Gibson received further critical acclaim for his directing of the 2006 action-adventure film Apocalypto.[65] Gibson's fourth directorial effort is set in Mesoamerica during the early 16th century against the turbulent end times of a Maya civilization. The sparse dialogue is spoken in the Yucatec Maya language by a cast of Native American descent.

Gibson starred in The Beaver, a film directed by former Maverick co-star, Jodie Foster. The Beaver premiered at The South by Southwest Festival in Austin on 16 March 2011. The opening weekend in 22 theaters was considered a flop: it made $104,000 which comes to a per-theater average of $4,745. The film's distributor, Summit Entertainment, had originally planned for a wide release of The Beaver for the weekend of 20 May, but after the initial box-office returns for the film, the company changed course and decided instead to give the film a "limited art-house run". Michael Cieply of the New York Times observed on 5 June 2011, that the film had cleared just about $1 million, making it a certified "flop". Director Jodie Foster opined that the film did not do well with American audiences because it was a dramedy and "And very often Americans are not comfortable with (that)."

Retrieved from "https://movies.fandom.com/wiki/Mel_Gibson?oldid=71934"
Community content is available under CC-BY-SA unless otherwise noted.