Moviepedia
Register
Don't have an account?
Sign In
Advertisement
in: Articles with hCards, 1970 births, Living people,
and 26 more 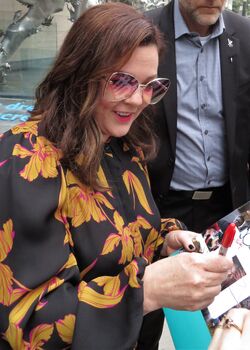 She began appearing in television and films in the late 1990s, and first gained nationwide recognition for her role as Sookie St. James on the television series Gilmore Girls (2000–2007). She played Dena on the ABC sitcom Samantha Who? (2007–2009), before starring as Molly Flynn on the CBS sitcom Mike & Molly (2010–2016), the latter of which earned her a Primetime Emmy Award for Outstanding Lead Actress in a Comedy Series, as well as two other nominations during subsequent seasons. She has also been nominated five times for the Primetime Emmy Award for Outstanding Guest Actress in a Comedy Series for her five appearances as a host on Saturday Night Live, eventually winning in 2017.

McCarthy received widespread recognition and critical acclaim for her performance in the comedy film Bridesmaids (2011); for her work in the film, she received nominations for the BAFTA Award, Screen Actors Guild Award, and Academy Award for Best Supporting Actress. She also had supporting roles in The Nines (2007), The Back-up Plan (2010), Life as We Know It (2010), This Is 40 (2012), and The Hangover Part III (2013). McCarthy then starred in the comedy films Identity Thief and The Heat, both released in 2013. In 2014, McCarthy starred in the comedy film Tammy and the comedy-drama film St. Vincent. In 2015, she headlined the action comedy film Spy, for which she received a Golden Globe Award nomination. In 2016, she starred in the comedy films The Boss and Ghostbusters. Following starring roles in the 2018's comedy films Life of the Party, and The Happytime Murders, she then starred as Lee Israel in the biographical drama Can You Ever Forgive Me?. Her performance in the latter received critical acclaim and nominations for several accolades including the Academy Award for Best Actress.

McCarthy and her husband Ben Falcone founded On the Day, a production company. In 2015, she received a star on the Hollywood Walk of Fame, launched her clothing line, Melissa McCarthy Seven7, and was named the third highest-paid actress in the world by Forbes. In 2016, Forbes named her the world's second highest-paid actress, with earnings of $33 million.

McCarthy was born in Plainfield, Illinois to Sandra and Michael McCarthy. She is a cousin of actress and model Jenny McCarthy and professional basketball player Joanne McCarthy. McCarthy was raised on a farm in a large Catholic family. Her father is of Irish descent, while her mother is of English, German, and Irish ancestry. Some of her forebears were from County Cork. She graduated from St. Francis Academy (now Joliet Catholic Academy) in Joliet, Illinois. Her career started with stand-up comedy in Los Angeles, and later in New York City. McCarthy is an alumna of The Groundlings, an improvisational and sketch comedy troupe based in Los Angeles, California.

McCarthy made her first television appearance in an episode of the NBC comedy series Jenny, opposite her cousin Jenny McCarthy. She made her feature film debut in a minor role in the 1999 comedy Go, and later had roles in the movies Drowning Mona, Disney's The Kid, Charlie's Angels, The Third Wheel and The Life of David Gale. She also worked in three episodes of Kim Possible, voicing DNAmy. In 2000, McCarthy was cast as Sookie St. James, the upbeat and klutzy best friend of Lorelai Gilmore, on The WB television series Gilmore Girls. Throughout the series, Sookie is Lorelai's business partner and cheerleader. On April 7, 2016, McCarthy announced on The Ellen DeGeneres Show that she would be returning for the show's revival, Gilmore Girls: A Year in the Life, on Netflix. The latter was released November 25, 2016 and McCarthy appears in one of its four episodes.

In 2007, she starred opposite Ryan Reynolds in the science fantasy psychological thriller The Nines, written and directed by John August. She later starred in the independent comedies The Captain, Just Add Water, and Pretty Ugly People. Also in 2007, McCarthy starred as Dena Stevens on the ABC sitcom Samantha Who?. McCarthy played Samantha's socially awkward childhood best friend, whom Samantha hasn't seen since seventh grade. When Samantha wakes from her coma, Dena convinces Samantha that they have always been best friends. While Andrea eventually forces her to reveal the truth, Samantha still remains friends with Dena. She guest starred in Rita Rocks and on Private Practice. In 2010, McCarthy played supporting roles in films The Back-up Plan and Life as We Know It.

2011-present:Mike and Molly, Bridesmaids and success

On September 20, 2010, McCarthy was cast in a leading role on the CBS sitcom Mike & Molly. In 2011, McCarthy had a breakout performance in the comedy movie Bridesmaids alongside Kristen Wiig, Maya Rudolph, Rose Byrne, Wendi McLendon-Covey and Ellie Kemper. McCarthy received an Academy Award nomination for her performance. In fall 2011, after achieving fame from Bridesmaids, she received her first Emmy Award for Outstanding Lead Actress in a Comedy Series for her role on Mike & Molly. In June 2011, she hosted the Women in Film Crystal + Lucy Awards. McCarthy later had supporting roles in This Is 40 (2012), the spinoff to Judd Apatow's film Knocked Up, and The Hangover Part III (2013). She was invited to join the Academy of Motion Picture Arts and Sciences in June 2012 along with 175 others. McCarthy hosted Saturday Night Live on October 1, 2011, on April 6, 2013, on February 1, 2014, on February 13, 2016, and on May 12, 2017. She was nominated five times for a Primetime Emmy Award for Outstanding Guest Actress in a Comedy Series for her appearances on the television show from 2011–2017, winning in 2017.

In 2013, McCarthy co-starred in the crime comedy Identity Thief with Jason Bateman. Identity Thief opened at #1 at the box office, and grossed $174 million worldwide despite negative reviews. In his negative review of the film, film critic Rex Reed controversially made several references to McCarthy's weight, referring to her as "obese" and using pejorative terms to refer to her weight. Reed's comments attracted wide criticism from various film critics and the industry at large. Film critic Richard Roeper said, "This just smacks of mean-spirited name-calling in lieu of genuine criticism." In a column for The Huffington Post, Candy Spelling likened Reed's review to bullying.

Later in 2013, McCarthy co-starred with Sandra Bullock in the buddy cop comedy The Heat. The film was released in the United States and Canada on June 28, 2013 to both critical and commercial success. With McCarthy being called "box office gold, The Heat grossed $229 million worldwide. McCarthy co-wrote the script for the movie Tammy, which was released on July 2, 2014. McCarthy's character loses her job and her car, and then learns that her husband has been unfaithful. To get away, she is forced to rely on her alcoholic grandmother (Susan Sarandon) for transportation as they embark on a journey of self-discovery.

McCarthy produced a CBS pilot which starred her husband, Ben Falcone. McCarthy played the female lead, opposite Bill Murray, in the 2014 comedy film St. Vincent, directed and written by Theodore Melfi. On November 19, 2014, it was announced that McCarthy would portray fairy heroine Tinker Bell in the untitled comedy-adventure directed by Shawn Levy. She would also produce the film. In addition, McCarthy was the lead in frequent collaborator Paul Feig's spy comedy Spy (2015), a role that earned McCarthy her first Golden Globe Award nomination.

In May 2015, McCarthy received a star on the Hollywood Walk of Fame. In August 2015, Forbes ranked her as the third highest-paid actress of 2015, with earnings of $23 million.

In 2016, McCarthy starred in The Boss, a comedy film based on a character which McCarthy had created in the Los Angeles Groundlings – a wealthy businesswoman "who goes to jail for insider trading, and struggles to reinvent herself as America’s new sweetheart when she's released". Also that year, she played an author and scientist in the all-female reboot of Ghostbusters, directed by Paul Feig.

On May 31, 2016, McCarthy was cast as celebrity biographer Lee Israel in the dark comedy-drama film Can You Ever Forgive Me? directed by Marielle Heller. She replaced Julianne Moore who dropped out of the film. McCarthy's performance as Lee drew high praise and Film Journal International said that her previous film roles "could not anticipate how fearlessly and credibly she inhabits Lee Israel." She received an Academy Award for Best Actress nomination.

On February 4 and 11, 2017 she made surprise appearances on Saturday Night Live portraying White House Press Secretary Sean Spicer. She returned to the show to portray Spicer on April 16 and May 13, 2017 (also hosting the latter

McCarthy appeared in a Super Bowl LI ad for Kia Motors, promoting the Kia Niro. McCarthy played a wannabe environmentalist, who has a series of mishaps befall her such as being capsized by a whale, being charged by a rhino, and falling down a crevasse. The commercial featured the song "Holding Out for a Hero".

McCarthy married her longtime boyfriend, Ben Falcone, an actor and alumnus of The Groundlings, on October 8, 2005. The couple have two daughters, Vivian, born May 2007, and Georgette, born March 2010. McCarthy's pregnancy with Vivian was written into the last season of Gilmore Girls. Vivian played the younger version of her mother's character in the 2016 movie The Boss.

Falcone often makes cameo appearances in McCarthy’s movies and TV series, such as a third-season episode of Gilmore Girls, Bridesmaids, The Heat, Tammy, Identity Thief, Spy, and The Boss.

Since the start of Mike & Molly, McCarthy has lost an estimated 75 lb (35 kg). She credits the weight loss to a high-protein, low-carbohydrate diet, regular exercise, and a "super-boring life" that includes a 7:30 p.m. bedtime.

McCarthy is the cousin of actress, model, and television host Jenny McCarthy.

On The Day Productions

In 2013, McCarthy founded the production company On the Day with her husband Ben Falcone. Tammy was the new company's first project. The film cost $20 million, quite a low budget, and McCarthy, who can command close to $10 million a role, took a smaller upfront salary in exchange for a larger-than-normal cut of the film's proceeds, according to people familiar with the deal.

McCarthy, who studied Textiles at Southern Illinois University, originally was interested in a career in fashion before she pursued a career in acting. When she first moved to New York City, it was to attend the Fashion Institute of Technology. One of her closest friends is shoe designer Brian Atwood. McCarthy also spent time working as the costumer for a dance company.

Following her films, she teamed up with Sunrise Brands to manufacture her first clothing collection, Melissa McCarthy Seven7, for plus-size women. The line will include clothes up to size 28. McCarthy states that "People don't stop at size 12. I feel like there's a big thing missing where you can't dress to your mood above a certain number. Malls segregate "plus-size" clothes stores and hide these stores away from other sections of the mall. Her fashion line, Seven7, debuted in August 2015 on the Home Shopping Network, with plans for her designs to be sold in major retailers.