watch 01:56
The Loop (Movies)
Do you like this video?
Play Sound
Menace II Society 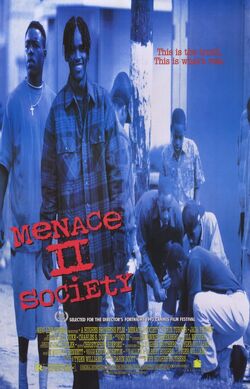 The film is set in South Central Los Angeles, California and follows the life of a young man named Kaydee "Caine" Lawson and his close friends.

It gained notoriety for its scenes of violence, profanity and drug-related content. It was released in May 1993 to critical acclaim for its gritty portrayal of urban violence and its powerful underlying messages.

Kaydee "Caine" Lawson (Tyrin Turner) is a child raised in South Central Los Angeles, California. His father was a dope dealer who was killed in a drug deal when he was 10 years old and his mother was a heroin addict who died of an overdose. As a result, he went to go live with his grandparents. Caine grows up to become a drug dealer himself, along with his friends.

In the beginning of the film, Caine and his best friend Kevin "O-Dog" Anderson (Larenz Tate) enter a local store to buy malt liquor, as the Korean storekeeper and his wife watch them suspiciously. As they are about to leave, an argument ensues and the shopkeeper insults O-Dog by saying, "I feel sorry for your mother".

Enraged, O-Dog shoots him and his wife. Then, he takes money from the cash register, only to find that there are only six dollars in there. He then takes more money from one of the dead shopkeeper's socks and the video surveillance tape. As a result, they both flee from the scene to avoid getting caught.

Afterwards, Caine graduates from high school and in the evening, Caine and his friends celebrate at a house party. Later on, Caine and his cousin Harold (Saafir) are both carjacked at gunpoint by thugs. Harold is murdered by gunshot while Caine is wounded. When O-Dog informs Caine that he has learned the identity of the carjackers, he, Caine, and their friend A-Wax (MC Eiht) all find the assailants and kill them, avenging Harold's death.

Caine and O-Dog are hired by Chauncey (Clifton Powell) a local hood for a car insurance scheme. However, they are both caught in the process and arrested by the police. A detective attempts to link Caine to the store killings by matching his fingerprints to the ones found on the bottle at the crime scene. However, without the security tape, there is not enough evidence to charge him.

Once released, Caine buys a Ford Mustang 5.0 from a chop shop and robs a local youth for his Dayton wheels. He then purchases a large quantity of cocaine to cook into crack and sell. Caine begins to enjoy his new hustler lifestyle with his crew and meets a local girl named Ilena (Erin Leshawn Wiley) at the park.

After facing police brutality and recovering in a hospital, Caine is visited by his friend, Ronnie (Jada Pinkett) who tells him that she has found a job in Atlanta and invites him to come with her. Caine shows hesitance, but is eventually persuaded and the two end up making love.

When Caine rejoins his friends, he notices that Chauncey is making various drunken advances towards Ronnie. Furious, Caine takes one of O-Dog's guns and pistol whips Chauncey with it. As revenge, Chauncey sends a copy of the robbery video tape (which O-Dog held on to) to the police. Later, Caine gets a phone call from Ilena, who tells him that she is pregnant with his child, but Caine does not believe it is his.

Before leaving for Atlanta, Caine is confronted by Ilena's cousin (Samuel Monroe Jr.) who chastises him for getting his cousin pregnant and failing to own up to his actions. With a few exchanges of words, an altercation ensues.

Caine beats up Ilena's cousin in front of his grandparents' house and continues to stomp him while he is down. After the fight, Caine's grandparents reprimand him and throw him out of their house.

Heartbroken, Caine leaves and goes to Ronnie's house, so they can go off in search of a better life in Atlanta. Just as Caine and Ronnie finish packing their things, Ilena's cousin (who seeks revenge on Caine for humiliating him) and a gang of gunmen execute a drive-by shooting on the house. Caine's friend Sharif is killed, O-Dog is arrested and Caine is mortally wounded.

As Caine bleeds to death, he sees previous flashbacks of what led to this moment. He realizes that his crime-ridden life has finally caught up with him, and remembers when his grandfather asked him if he cared whether he lived or died. Caine's last thought is, "Yeah, I do. Now it's too late."

Originally, MC Ren was set to play A-Wax, but he later turned down the role when he joined the Nation of Islam in late 1992. Rapper Spice 1 was set to play Caine and Tupac Shakur to play Sharif, but they were later fired with director Allen Hughes stating that Shakur was causing trouble on the set.

Shakur was angry for not being told why Sharif would turn Muslim. Six months after the firing, Shakur assaulted the director, resulting in him being found guilty of assault and battery. Shakur did not want to play the role of Sharif as he did not agree (in regards to the authenticity of such a role) that a Muslim could also be a gangbanger.

He is quoted as saying the following in a video interview,

Production on the film was shut down for two days when members of the Hacienda Bloods gang shot up the set in Crip territory (Jordan Downs).

The Clifton Powell and Ian Davids scene in the film where Chauncey receives information about a car to steal had to be dubbed by the actors due to air traffic.

"Menace II Society" opened at #7 at the box office, grossing $3,816,393 during its opening weekend and its widest release was in 581 theaters.

The film scored an 85% 'fresh' rating on Rotten Tomatoes, based on 35 reviews. Chicago Reader critic Jonathan Rosenbaum stated, "This is a powerful, convincing, and terrifying look at teenage crime in contemporary Watts."

EmanuelLevy.com gave the film an A, saying it is "The most stunning feature debut in the new African American cinema, even more so than Boyz n the Hood to which the coming of age feature bears thematic resemblance."

The film was placed on both Gene Siskel and Roger Ebert's 10 best films of 1992 lists, with Ebert praising "the way the filmmakers tell Caine's story without making him seem either the hero or victim".

Geoff Andrew of Time Out stated, "Regrettably, the Hughes Brothers' first feature is a compendium of cliches."

Stephen Holden of The New York Times stated, "If Menace II Society is terrific on ambiance, it is considerably less successful in revealing character."

At the 1994 MTV Movie Awards, "Menace II Society" was awarded "Best Movie" (beating out the likes of "Philadelphia," "Jurassic Park" and "Schindler's List").

It also won an Independent Spirit Award for "Best Cinematography."

In November of 1997, the film was chosen by Entertainment Weekly magazine as one of the "50 Greatest Independent Films" in a special supplement devoted to independent films that was only distributed to subscribers.

Retrieved from "https://movies.fandom.com/wiki/Menace_II_Society_(1993)?oldid=308688"
Community content is available under CC-BY-SA unless otherwise noted.