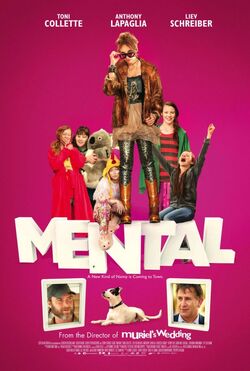 When a philandering father's wife is committed following a nervous breakdown, he impulsively hires free spirited hitchhiker Shaz to take care of his five misfit daughters. The wild, charismatic Shaz transforms the girls from town jokes into forces to be reckoned with, particularly making a mark on sixteen year old Coral who has never encountered anyone as fearless, cool or reckless before. But Shaz has a secret, and when Coral discovers the real reason Shaz has come to town she must make a decision. Betray her hero, the person who's changed her life, or follow her and become just as crazy.

Retrieved from "https://movies.fandom.com/wiki/Mental?oldid=74570"
Community content is available under CC-BY-SA unless otherwise noted.