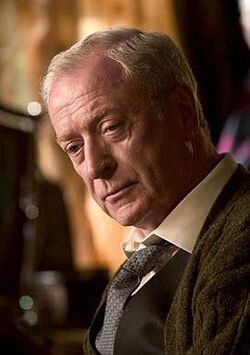 Caine was born in Rotherhithe, South East London to Maurice Micklewhite, a Catholic fish-porter, and Ellen Maria, a Protestant charlady. He grew up in nearby Camberwell attending Wilson's School (at that time Wilson's Grammar School) and during World War II was evacuated to North Runcton in Norfolk. In 1944 he passed his eleven-plus exam. He left school at sixteen after gaining four O-Levels and did his National Service from April 1952 to 1954 in the Royal Fusiliers, serving in Germany and Korea.

When Caine first became an actor, he adopted the stage name "Michael Scott". His agent soon informed him, however, that another actor was already using the same name, and that he had to come up with a new name immediately. Speaking to his agent from a telephone box in Leicester Square in London, Caine looked around for inspiration, noted that The Caine Mutiny was being shown at the Odeon Cinema, and decided to change his name to "Michael Caine". He once joked to an interviewer that had he looked the other way, he would have ended up as "Michael One Hundred and One Dalmatians".

After several minor roles, Caine came into the public eye as an upper-class British army officer in the 1964 film Zulu. This proved paradoxical, as Caine was to become notable for using a regional accent, rather than the Received Pronunciation hitherto considered proper for film actors. At the time, Caine's working-class cockney, just as with The Beatles' Liverpudlian accents, stood out to American and British audiences alike. Zulu was closely followed by two of his best-known roles: the spy "Harry Palmer", in The IPCRESS File (1965), and the woman-chasing Alfie (1966). He went on to play Palmer in a further two films. His trademark horn-rimmed glasses did not prevent him from becoming a pin-up. After ending the 1960s with the equally iconic The Italian Job and a solid role as an RAF fighter pilot, Squadron Leader Canfield, in the all-star cast of Battle of Britain (1969), Caine entered the 1970s with Get Carter, a British gangster film.

Michael Caine as Jack Carter in Get Carter Caine was busy throughout the 1970s, with successes including Sleuth (1972) (opposite Laurence Olivier) and The Man Who Would Be King (1975). By the end of the decade he had moved to the U.S., but his choice of roles was beginning to be criticised. Caine was averaging two films a year, but these included such failures as The Swarm (1978), Beyond the Poseidon Adventure (1979), The Island (1980) and The Hand (1981). Although Caine also took better roles, including a BAFTA-winning turn in Educating Rita (1983) and an Oscar-winning one in Hannah and Her Sisters (1986), he continued to appear in notorious duds like Jaws: The Revenge (1987) and Bullseye! (1990). Of the former, Caine famously said "I have never seen the film, but by all accounts it was terrible. However I have seen the house that it built, and it is terrific."

The 1990s were a lean time for Caine as he found good parts harder to come by. His early '90s output included a villain in the Steven Seagal flop On Deadly Ground (1994), two straight to video Harry Palmer sequels and a few television movies. However, Caine's reputation as a Pop icon was still intact, thanks to his roles in iconic films like The Italian Job and Get Carter. His performance in 1998's Little Voice was seen as something of a return to form, and won him a Golden Globe Award. Better parts followed, including The Cider House Rules (1999, for which he won his second Oscar), Last Orders (2001), The Quiet American (2002) and others which have helped to rehabilitate his reputation. Several of Caine's classic films have been remade to appeal to new, younger audiences, including The Italian Job, Get Carter, and Alfie. In 2005 he was cast as Bruce Wayne's butler Alfred in the Batman film series. In 2006 he appeared in the films Children of Men and The Prestige.

Caine has been Oscar-nominated six times, winning his first Academy Award for the 1986 film, Hannah and Her Sisters, and his second in 1999 for The Cider House Rules, in both cases as a supporting actor. He was made a Commander of the Order of the British Empire (CBE) in 1993 for services to drama, and in 2000 a Knight Bachelor, becoming Sir Maurice Micklewhite. Unlike many actors who adopt their stage name for everyday use, Caine still uses his real name when he is not working.

Caine is a popular subject for impressionists and mimics, having a voice and manner of speaking that are distinctive yet fairly easy to imitate. Most Caine impressions include the catchphrase "Not a lot of people know that". Peter Sellers initiated this, when he appeared on BBC TV's Parkinson show on 28 October 1972 and said:

Later, there was an answering machine message recorded by Peter Sellers as Caine, saying, "My name is Michael Caine. Peter Sellers is not in at the moment. Not a lot of people know that." It was also parodied in Harry Enfield's Television Programme by Paul Whitehouse, who introduced himself with the line "My name is Michael Paine, and I am a nosey neighbour." In 1983 the remark really caught on, when Caine was given the line to say as an in-joke in the film Educating Rita. In 1984 he also used the name Not A Lot Of People Know That! on a book of trivial facts for charity.

He has stated that his four most memorable roles to him are, in no particular order, Alfie, Get Carter, The Italian Job, and The Muppet Christmas Carol.

Caine has been married twice:

Some time after his mother died, Caine and his younger brother learned they had an elder half-brother, named David. He suffered from severe epilepsy and had been kept hospitalized his entire life. Although their mother regularly visited her first son in the hospital, even her husband did not know the child existed. David died in 1992.

In the Sixties, Terence Stamp shared a flat with Caine before and during their rise to fame (Stamp became famous first after his Oscar nominated role in Billy Budd). In his autobiography, "Double Feature", Stamp describes various incidents with Caine, including the moment when Caine was offered his breakthrough role in Zulu.This was a couple of hours before Caine's thirtieth birthday, which was a deadline Caine had set himself to "make it" or quit acting. Also, Caine tried to force Stamp to reverse his decision to turn down the role of Alfie; a star role that Caine later accepted. In his later autobiography, "What's it All About", Caine states that he "still wakes up sweating in the night as he sees Terence agreeing to accept my advice". The friendship eventually dwindled at the tail-end of the Sixties and this is described in contrast by Stamp and Caine in their respective autobiographies.