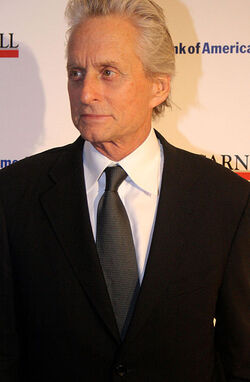 Douglas is the son of the celebrated actor Kirk Douglas and Bermudian actress Diana Dill. He married Diandra Luker on March 20, 1977. They had one son, Cameron, born on December 13, 1978. In 1980, Douglas was involved in a serious skiing accident which sidelined his acting career for three years. In September 1992, he underwent treatment for alcohol abuse at Sierra Tucson Center.

Michael Douglas after his visit aboard a P-3C Orion, at Naval Air Station Sigonella, Sicily, June 19, 2004.

In 2000, after 23 years of marriage, Diandra divorced Douglas, complaining of his womanizing, absenteeism, and not being a proper father to Cameron. Douglas married Welsh actress Catherine Zeta-Jones on November 18, 2000. She is exactly 25 years younger than Douglas (they were both born on September 25). They have two children, Dylan Michael (born August 8, 2000) and Carys Zeta (born April 20, 2003). Despite his previous marital problems Douglas has been an outspoken critic of other celebrities for their divorces, including Julia Roberts, Renée Zellweger, and Brad Pitt, rebuking him for divorcing actress Jennifer Aniston in order to "go hold orphans with Angelina Jolie".[citation needed] Douglas later apologized for his remarks regarding Pitt and Jolie, claiming he had been misquoted.

Douglas is an advocate of nuclear disarmament, is a supporter of the Nuclear Age Peace Foundation and sits on the Board of Directors of the Ploughshares Fund. In 1998 he was appointed UN Messenger of Peace by Secretary-General Kofi Annan.

He and Zeta-Jones hosted the annual Nobel Peace Prize concert in Oslo, Norway on December 11, 2003. They acted as co-masters of ceremony in the concert celebrating the award given to Shirin Ebadi.

In 2006, he was awarded an honorary degree (a D.Litt) by the University of St Andrews.

Douglas starred in the TV series The Streets of San Francisco from 1972 to 1976. Michael Douglas also received an Academy Award as producer for One Flew Over the Cuckoo's Nest in 1975. Although Douglas was a capable actor on Streets, his career was somewhat stagnant after the series, and he only appeared in occasional movies which were usually less than popular (for example, 1979's Running).

His fortunes changed when he starred in the 1984 romantic adventure comedy Romancing the Stone. His role in this hit movie re-introduced Douglas as a capable and likable leading man and finally made him a super-star at the age of 40. The film was followed a year later in 1985 by a sequel, The Jewel of the Nile. In 1987, Douglas starred in Fatal Attraction with Glenn Close and the film became a world-wide hit. Both Douglas and Close attended the same prep school, Choate Rosemary Hall. In 1988, Douglas received another Academy Award, this time for acting in the leading role of Wall Street.

Douglas continued to be one of the most sought-after actors in Hollywood and commands a hefty sum for his roles. After the commercial failure of It Runs in the Family (2003), Douglas did not star in a movie for three years, until The Sentinel in 2006.

Retrieved from "https://movies.fandom.com/wiki/Michael_Douglas?oldid=214293"
Community content is available under CC-BY-SA unless otherwise noted.